Self built and self assembly

Back in the saddle after a 2 year hiatus brought on by a certain luthier compounded a crap year and sent me barreling into despair.

But my wood pile was still there in the corner of the garage and every now and then I'd pick up this wonderful piece of padauk and give it a hard quick tap and hear this deep "thrummmm" coming out of it. I knew that thing would make a sweet neck one day. It came from a pallet the guys at South Pacific Timber put aside for me. I used to be in there every week going through stacks of boards looking for the right piece and, to their credit, they were always happy to oblige. One guy there told me it made a nice change to meet someone who actually cared about the timber. They would forklift pallets out the way so I could look at one 2m plank of vitex. Good dudes.

2 weeks ago I joined the community shed in Morningside. In preparation, I drew out the full size guitar of my own design in Illustrator and printed it 1:1, then cut out the stencil, sprayed it with adhesive and stuck it on a piece of 50mm thick mahogany I've had for about 5 years - another thing that sat in the wood pile. I'm back on the horse.

I drove down to see Adrian. Partly to thank the guy. He was the one who taught me how to build guitars, and by extension gave me the confidence with tools (lolz) and a healthy respect for shop discipline. I bought some maple and some other shit.

The aforementioned padauk log was squared off, ripped down, and the maple the same. Then we had this: 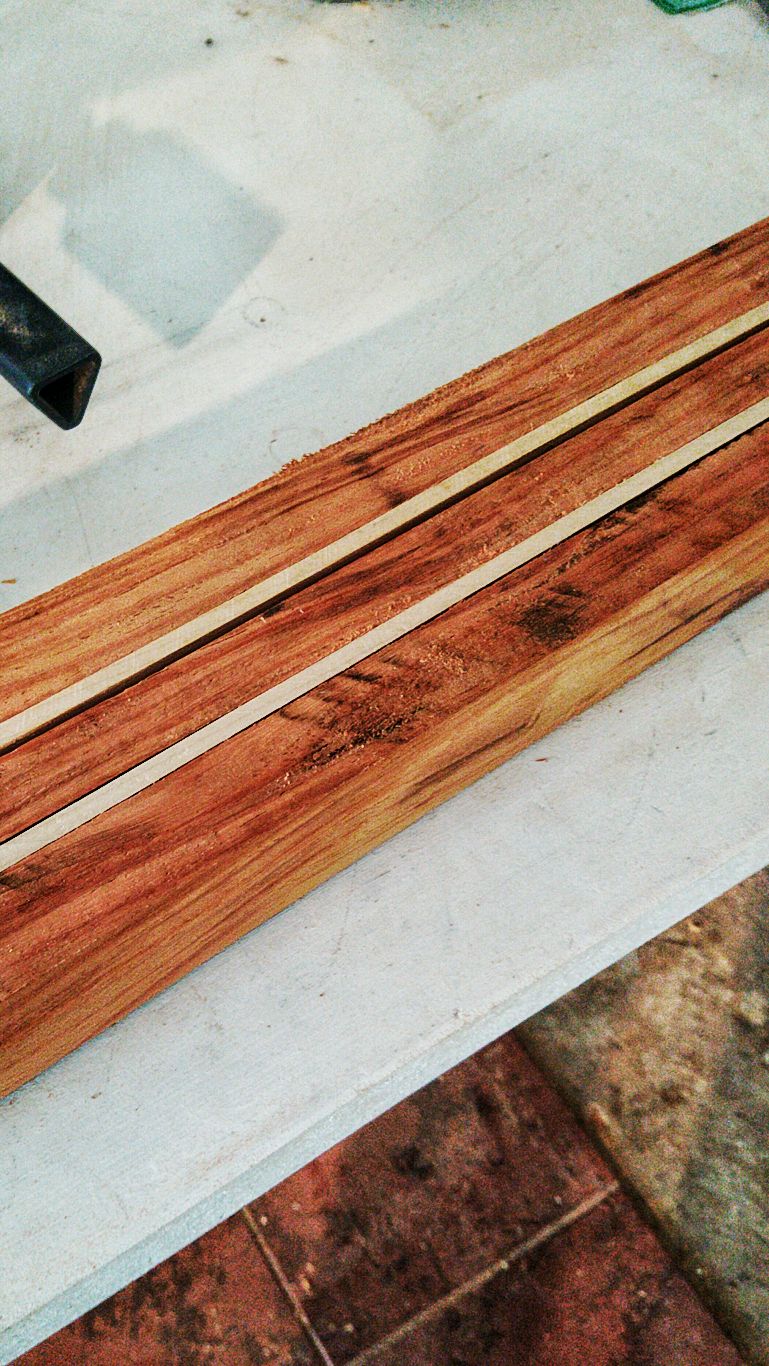 That too, once glued, clamped, then dried, was squared off.

10 degree scarf angle is the best scarf angle. So I drew one of them, leaving 8 inches at the end for the headstock to go.

I always do scarf joints for my headstock angle because it's far stronger with the long grain running down the headstock. No Gibson style breakages here. You cut the angle, flip the end piece around and glue it back on with the help of some locating pins as the joint is real slippery so if you just glue it and clamp it you won't get anywhere, except in a big mess. I free hand the actual cut on the bandsaw. Line it up, push it through, no dramas. 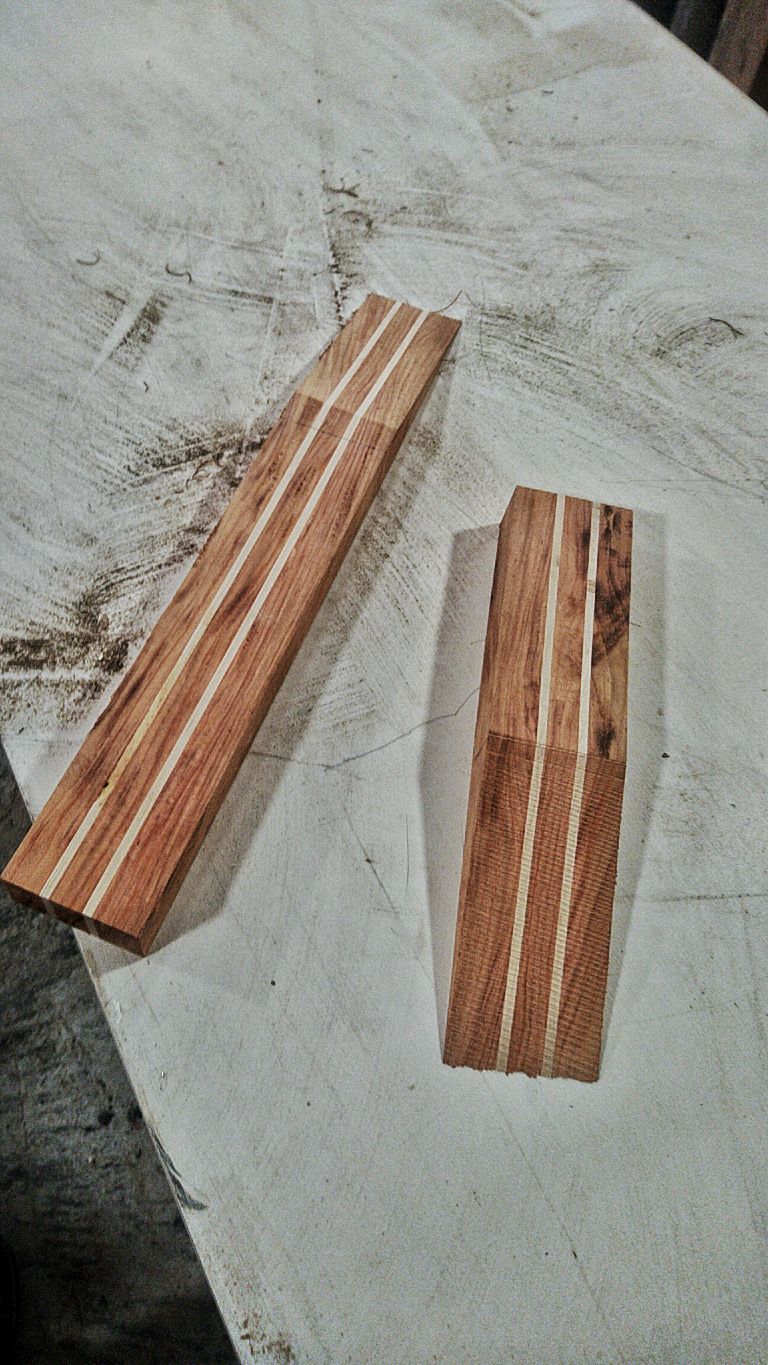 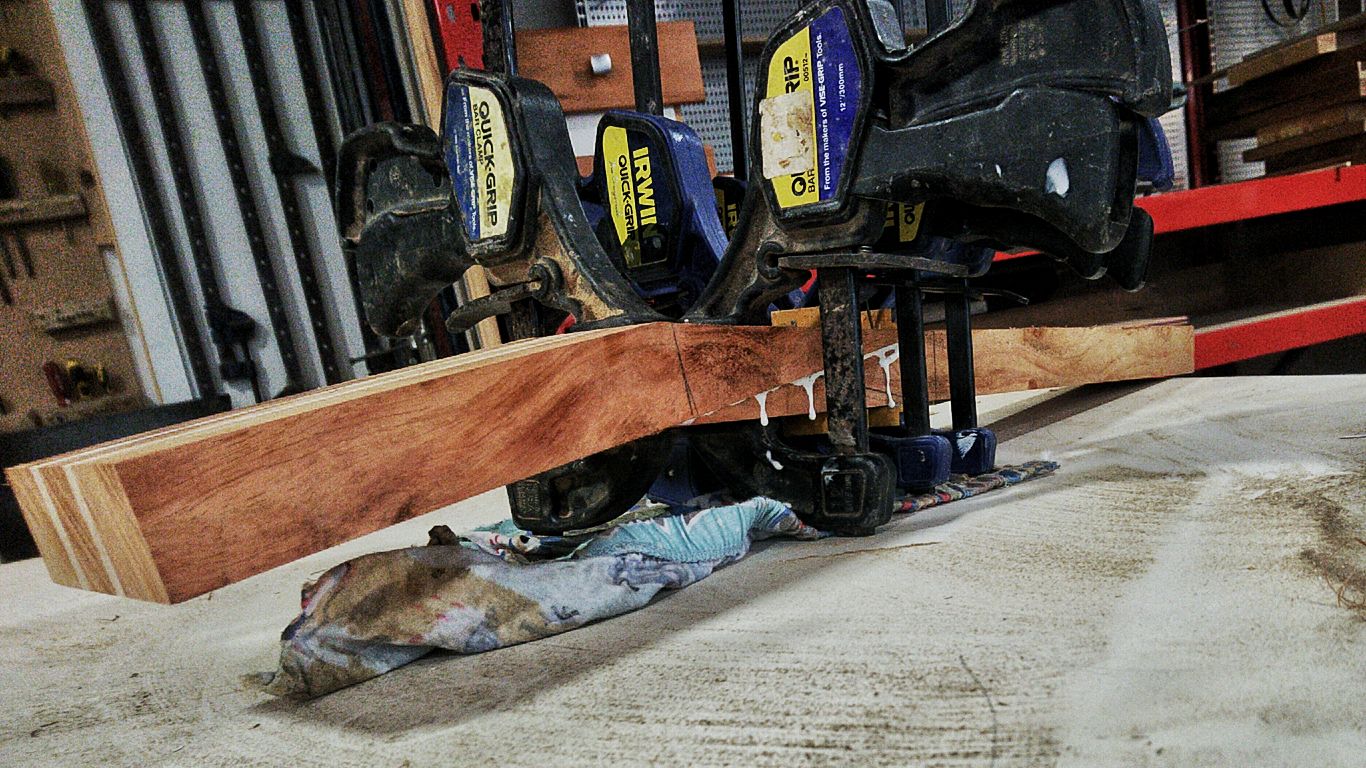 Squeeze out is what you want. It means the glue has filled the join and has nowhere else to go.

Since that all went quicker than expected I bandsawed out the body shape and hogged out some cavities: 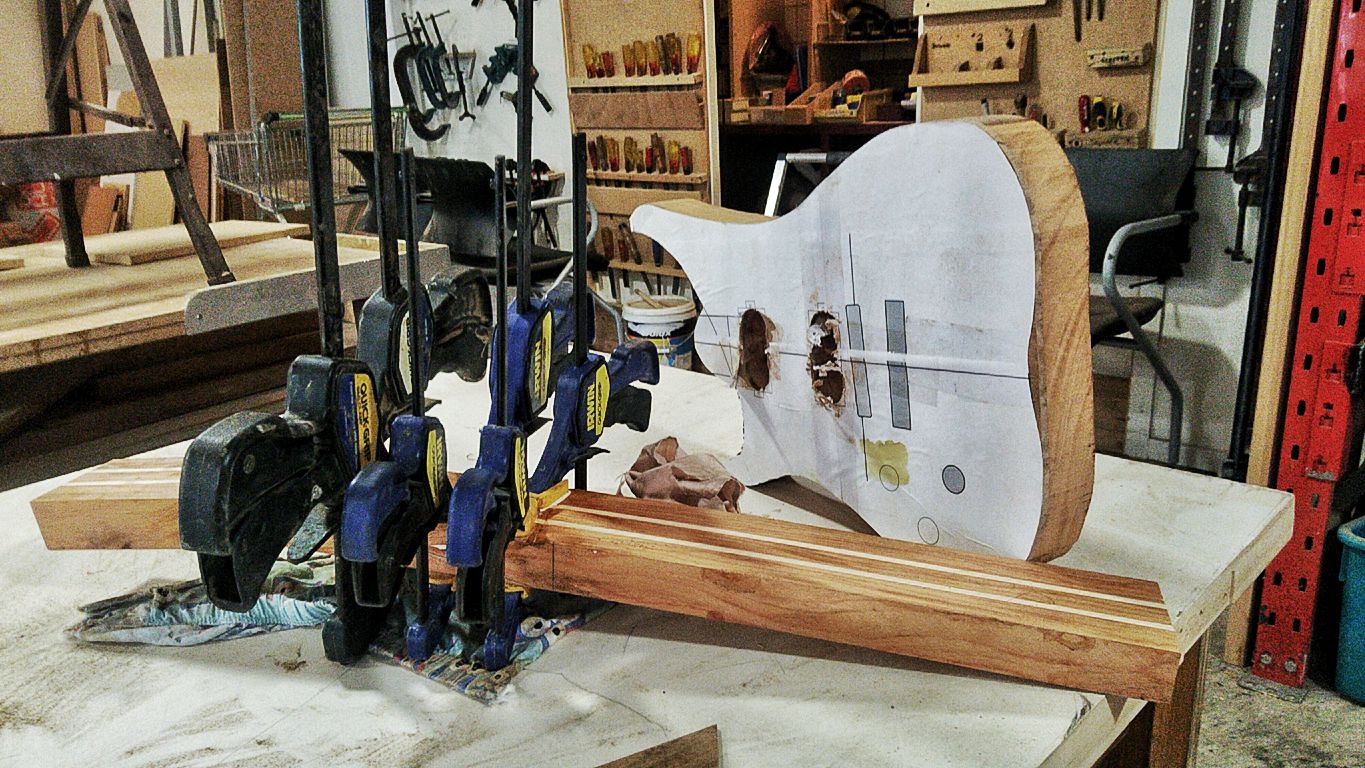 I'll probably route them out later on.

That's a mahogany body with a weird spalted/quilted/flamed vitex top.

Anyway. That was it. Go make some pretty sawdust. It's gratifying.

I've been actively constructing a neck.

I had to make an elaborate rig/sled to plane the top of the neck where the joint slipped a bit. Totally within expectation but the shed doesn't have any double sided tape so a rig had to be made. Normally you'd tape it to a big block so the headstock angle doesn't dick everything up when it goes through the thicknesser but no such luck here. Anyway. 2 hours later and the neck was level and the joint is perfect.

The truss rod went in next. Of course the shed doesn't have the right bit so this channel was slightly too wide but once it's sealed in there it doesn't move. Then the fretboard went on. 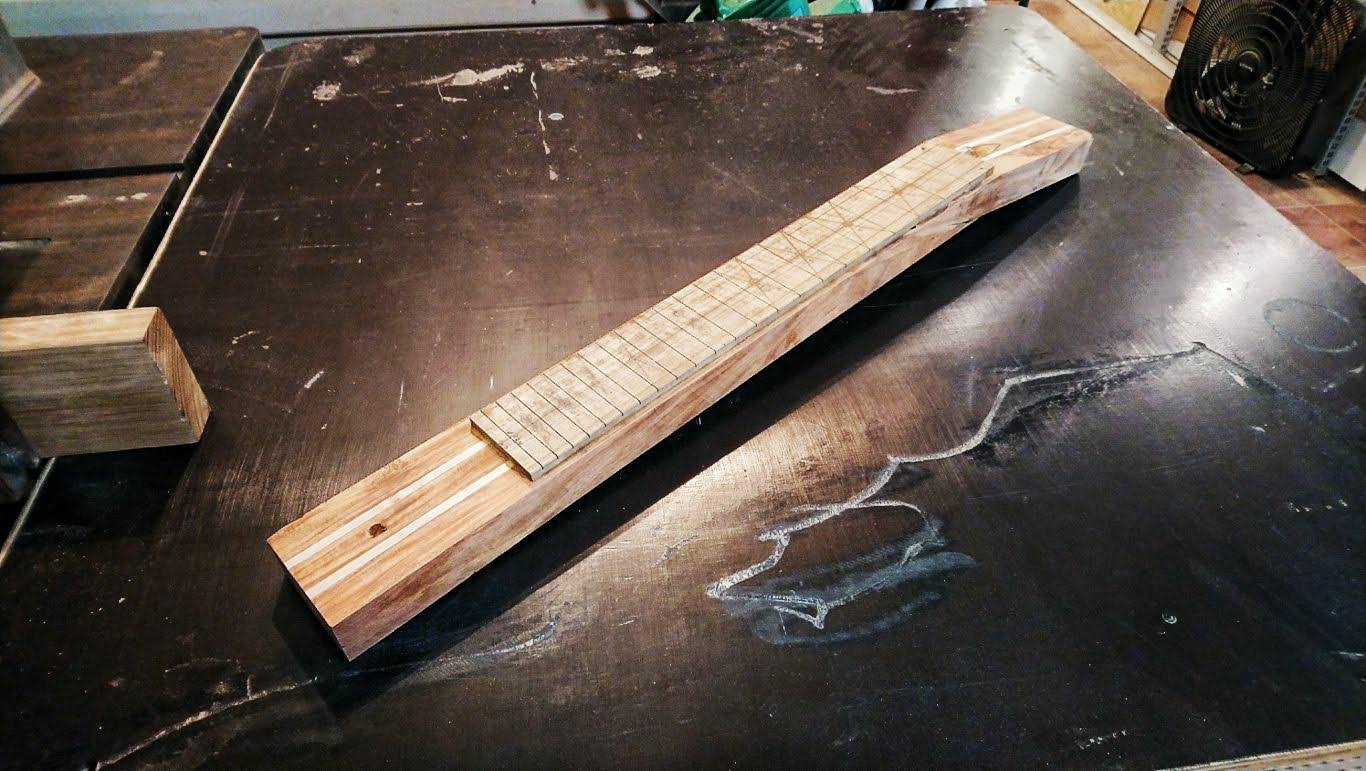 Reasonably straight forward. It's a 25.5" slotted board of flamed vitex. I'm surprised this wood isn't better known for guitar building. It's nigh on perfect albeit slightly heavy. It's very hard, stiff, durable and doesn't move and makes a fantastic feeling neck.

I glued it on with the help of some locating pins affixed in the blank section. These hold the board in place as the glue makes everything slip and slide around. Also I don't use the clamps you rotate to clamp stuff, they add a rotational force as they tighten which twists things. I use the good ol Irwin's quick grips.

Then mark out the rough fret positions. 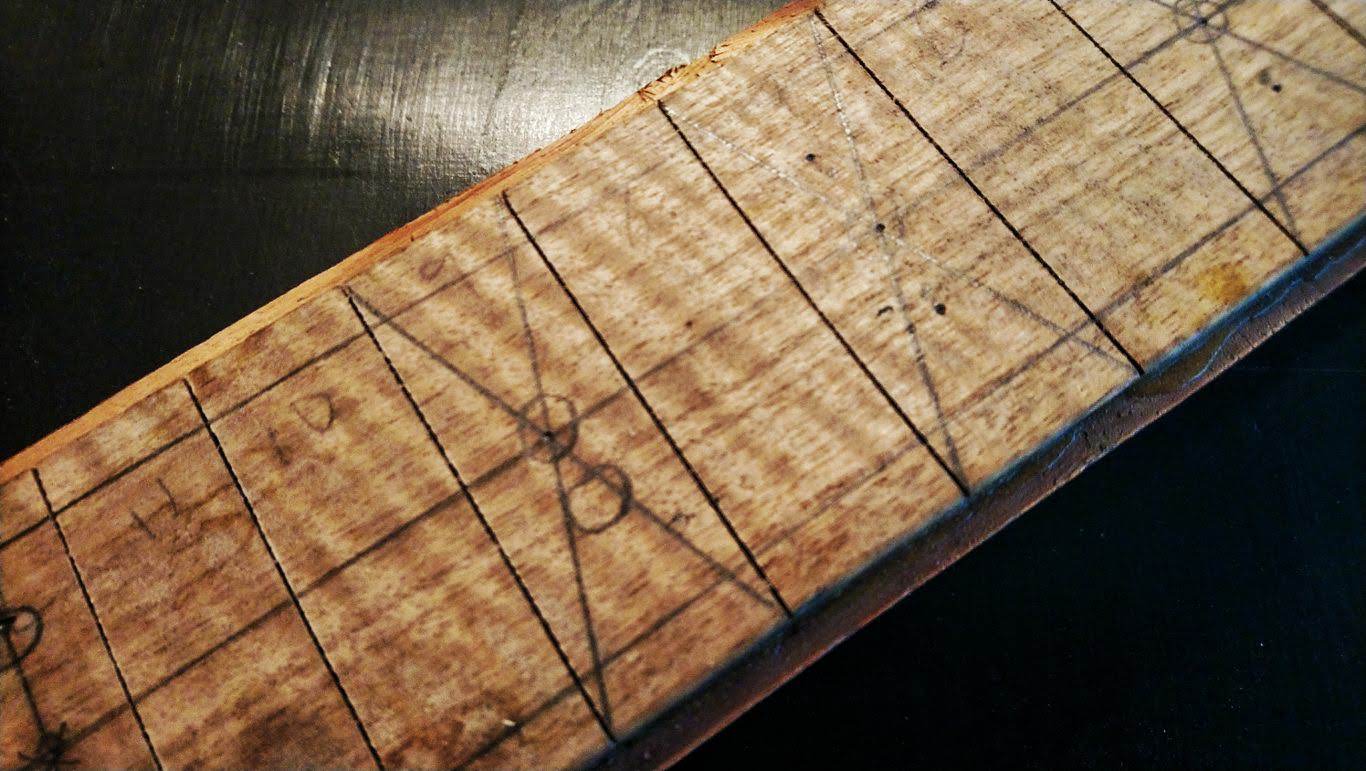 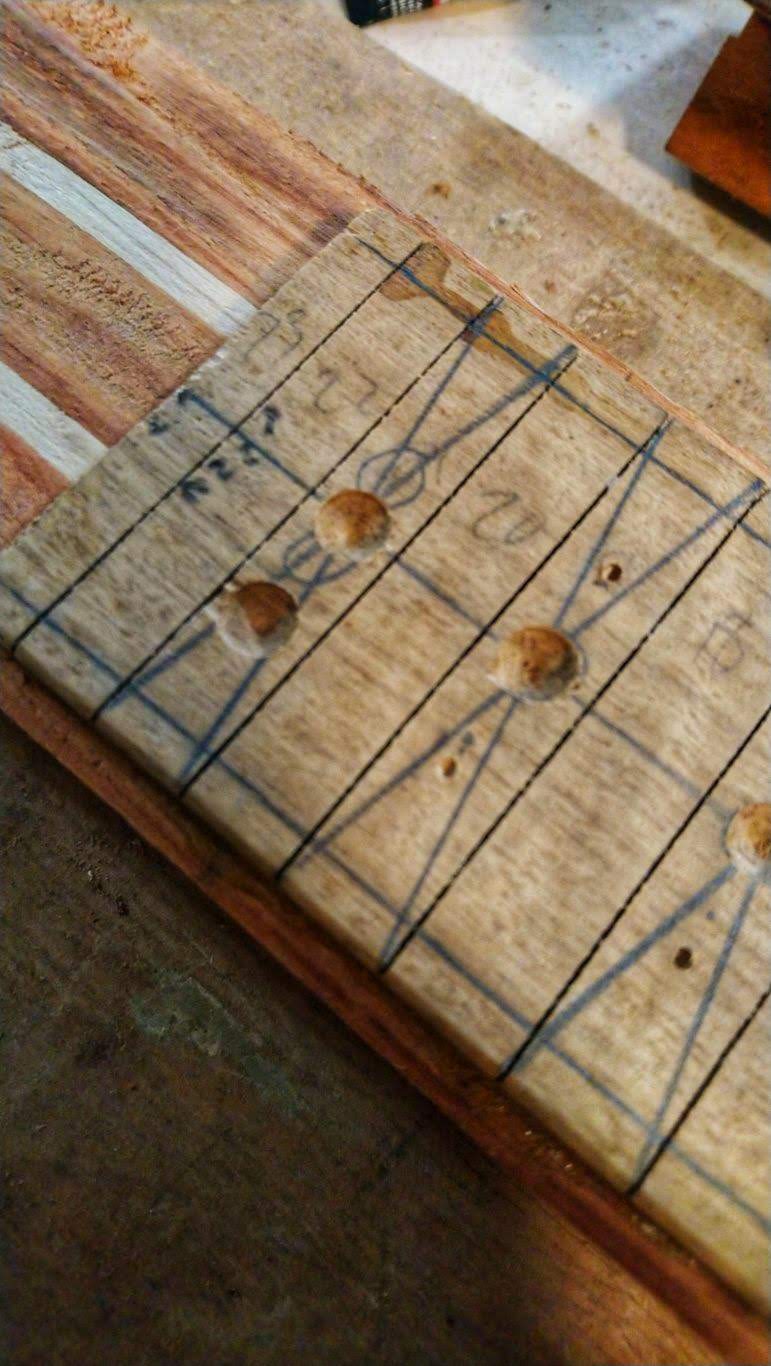 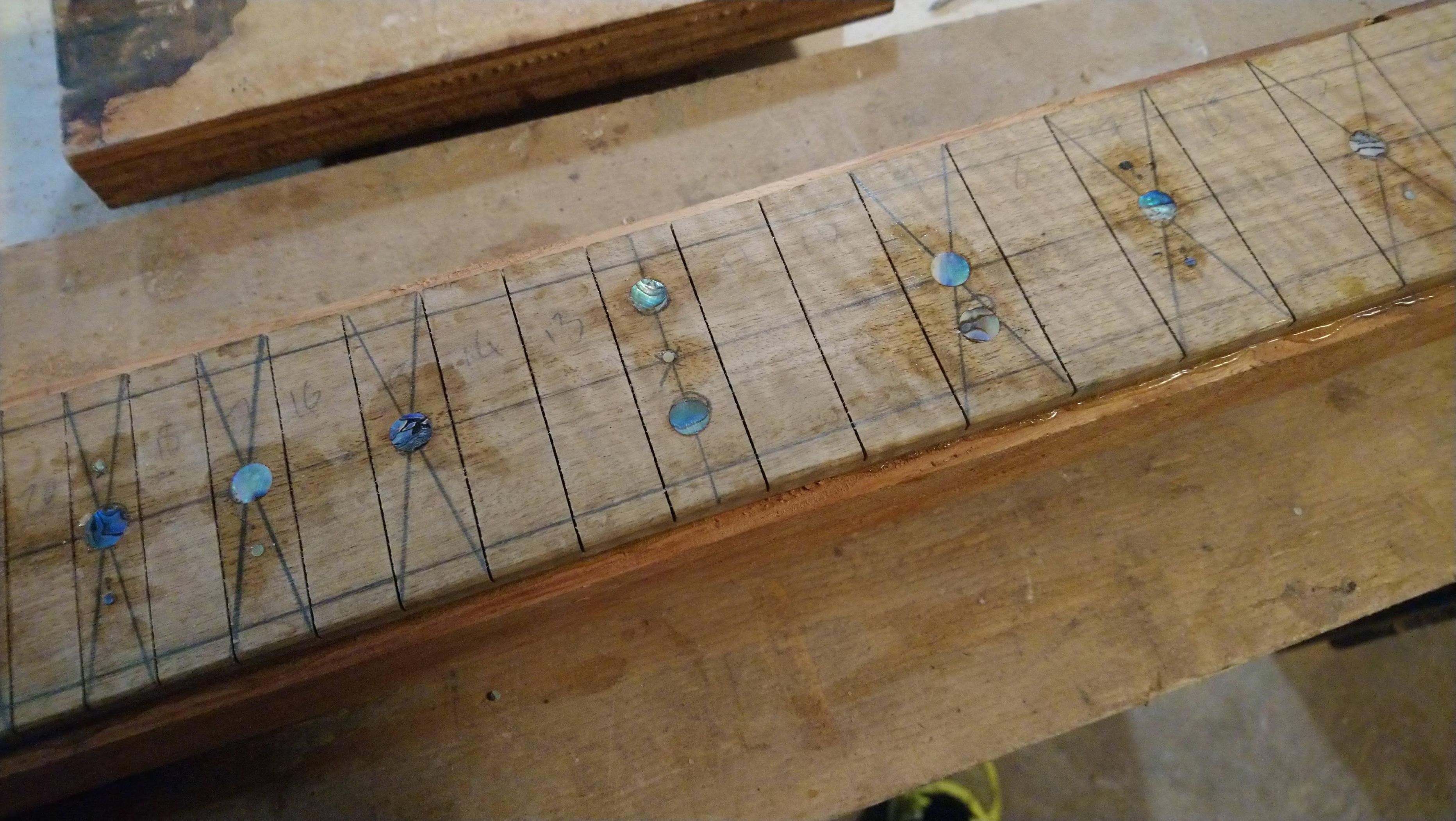 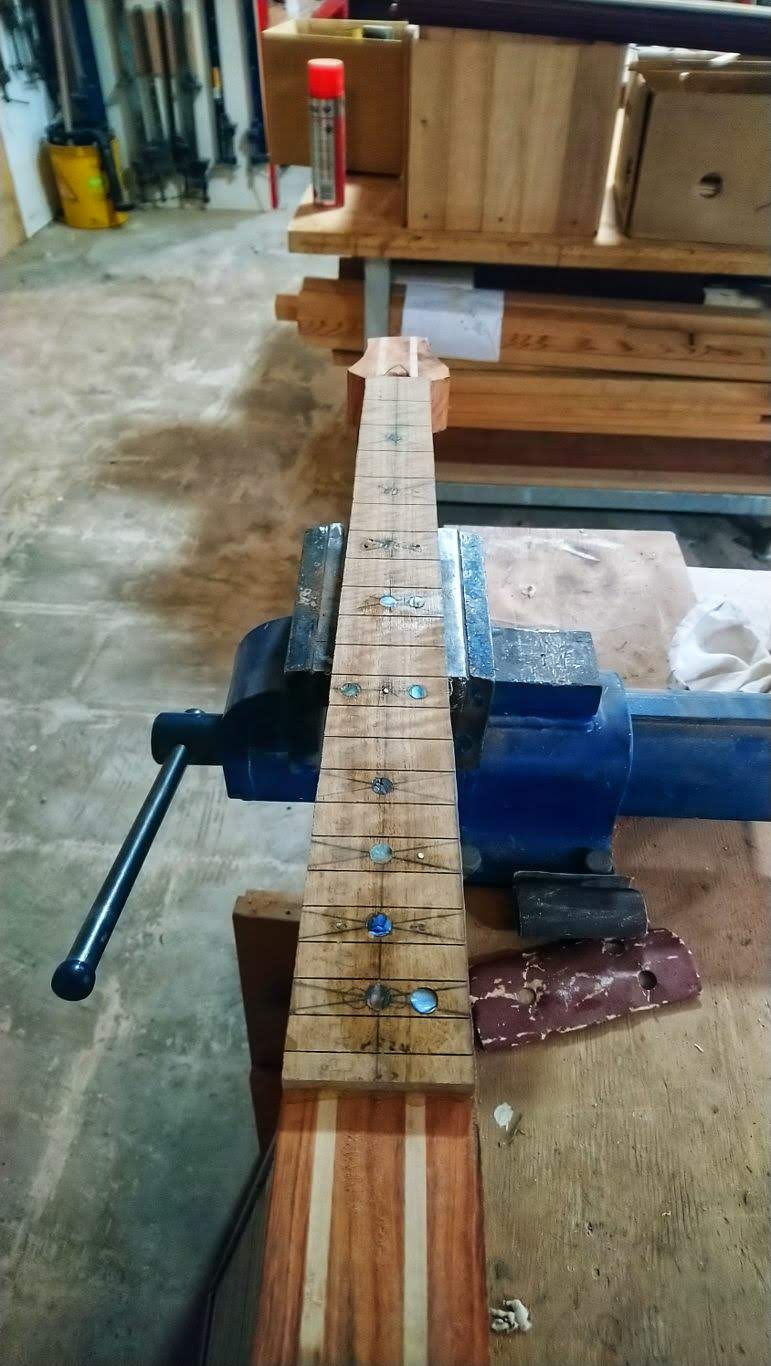 Then the board is radiused to 12". Starting at 80 grit and going up to 1500. It's a beautiful piece of wood. It shimmers like flamed maple but the colour is more wheat than sweet corn. Next step is fretting and neck shaping. The fun bits. 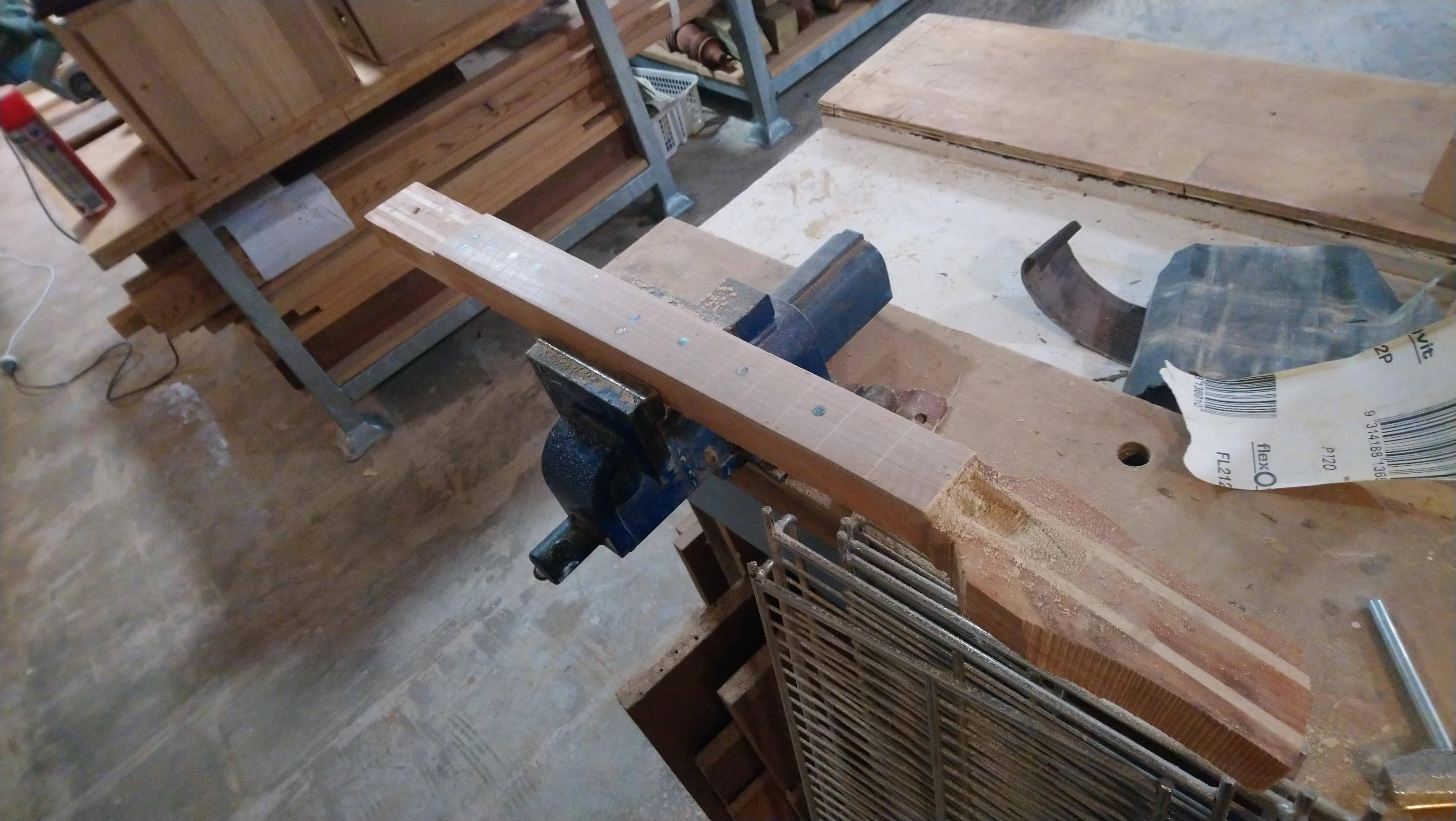 Agreed! So much easier to deal with. Once you start using this trick, you'll never go back to double-sided tape.
Jay

Optical wrote:Wow nice
How did you radius the fretboard?

With a radius sanding block. 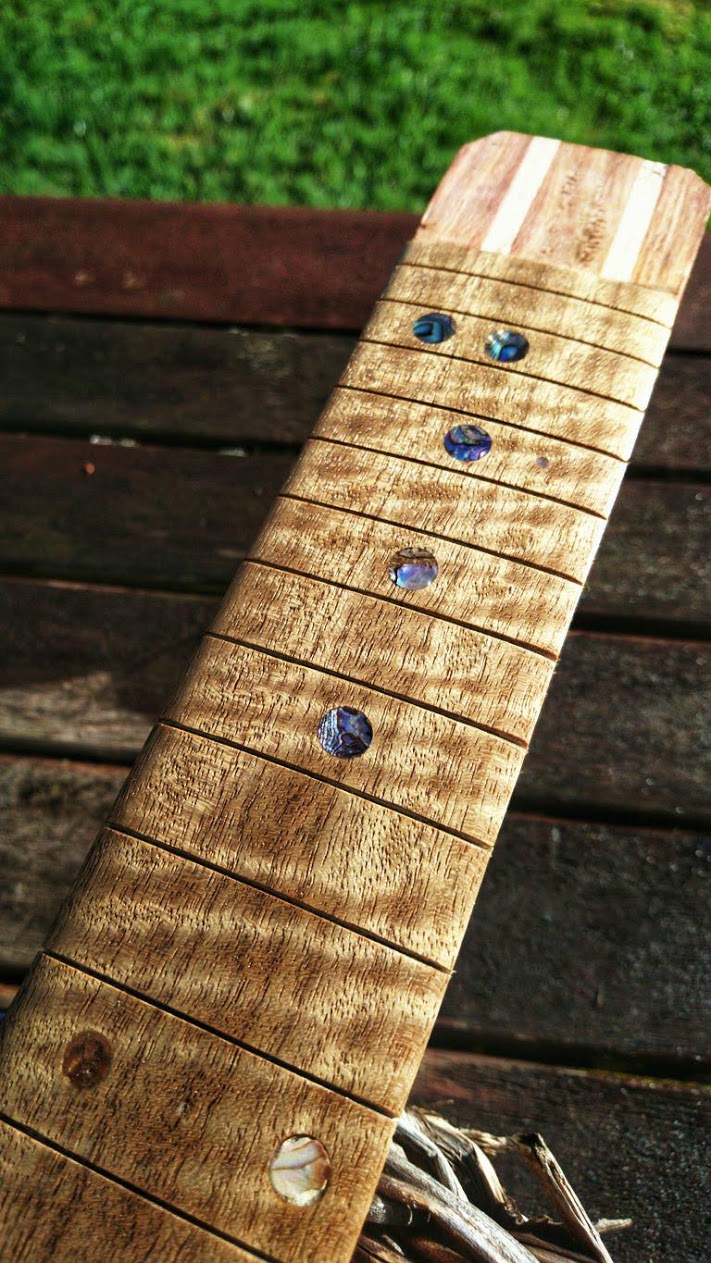 Vitex to 2000 grit with a single coat of BLO just as a sealer. Seriously a very pretty wood. I've enough for 2 more boards out of this piece I have and then I'm going to find some more because it's a) awesome and b) cheap.

However, that BLO coat was done after I routed the pickup cavities and neck pocket. Good ol' pickup rings hide all the shite. I decided to move the centreline by about 4mm which I think makes it look a lot more balanced. As it was it was too high and since the thing will be stained black it won't make a difference.

Rough shaping out of everything and it looks like this: 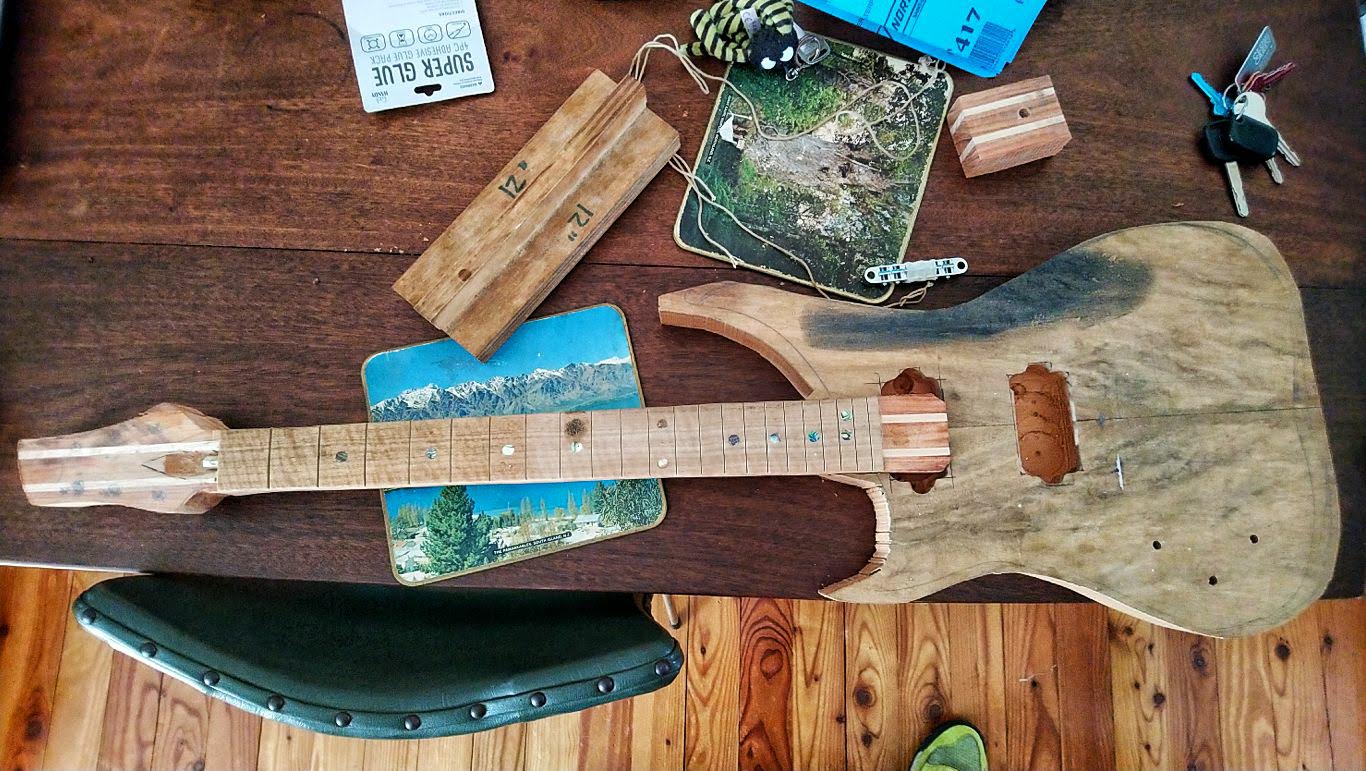 Next job is the control cavity, then cut the neck to rough dimensions (21mm at 1st, 25mm at the 12th). It's getting to the point where all the big woodworking is nearly done and then it's the shaping stage which means getting busy with a belt sander. 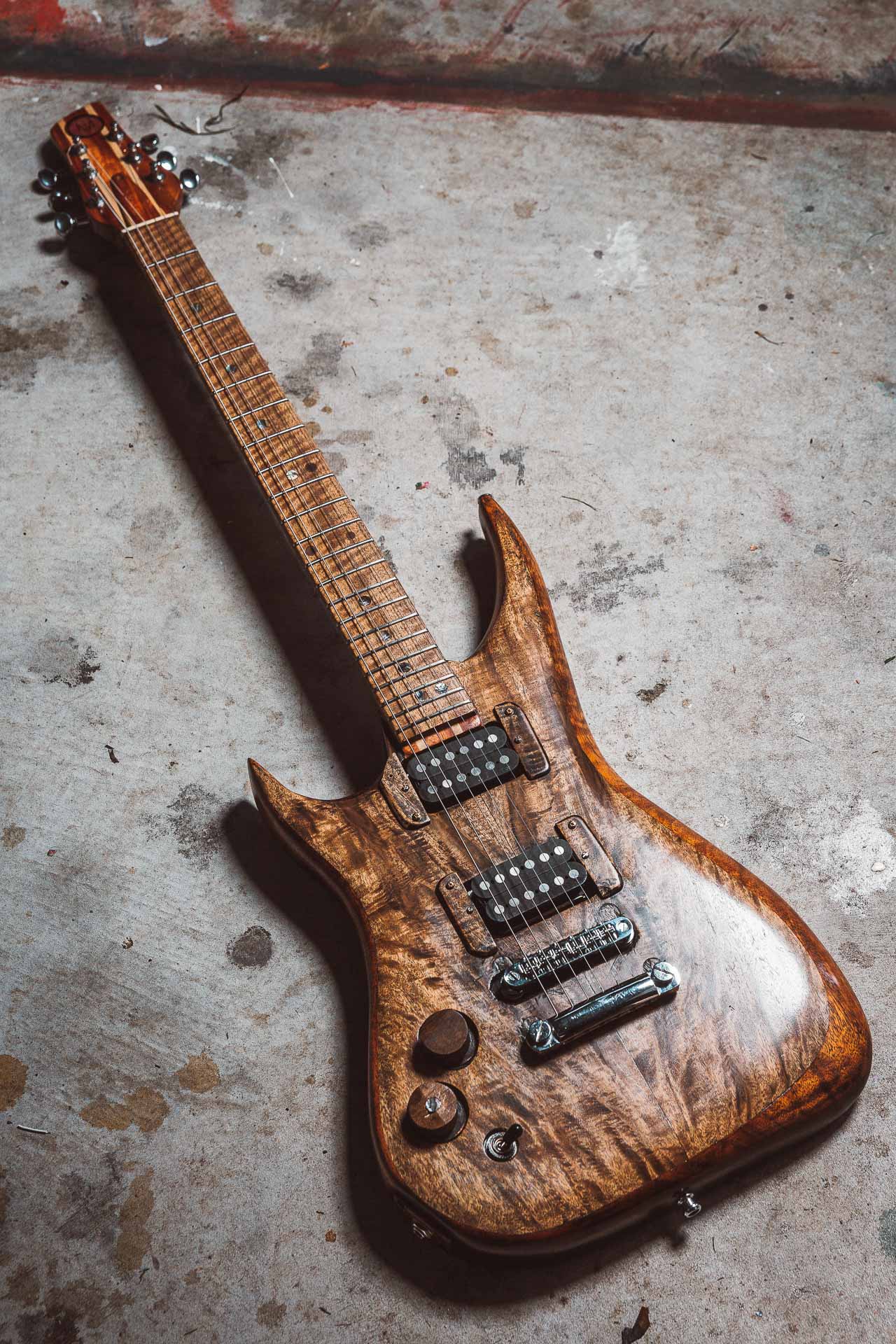 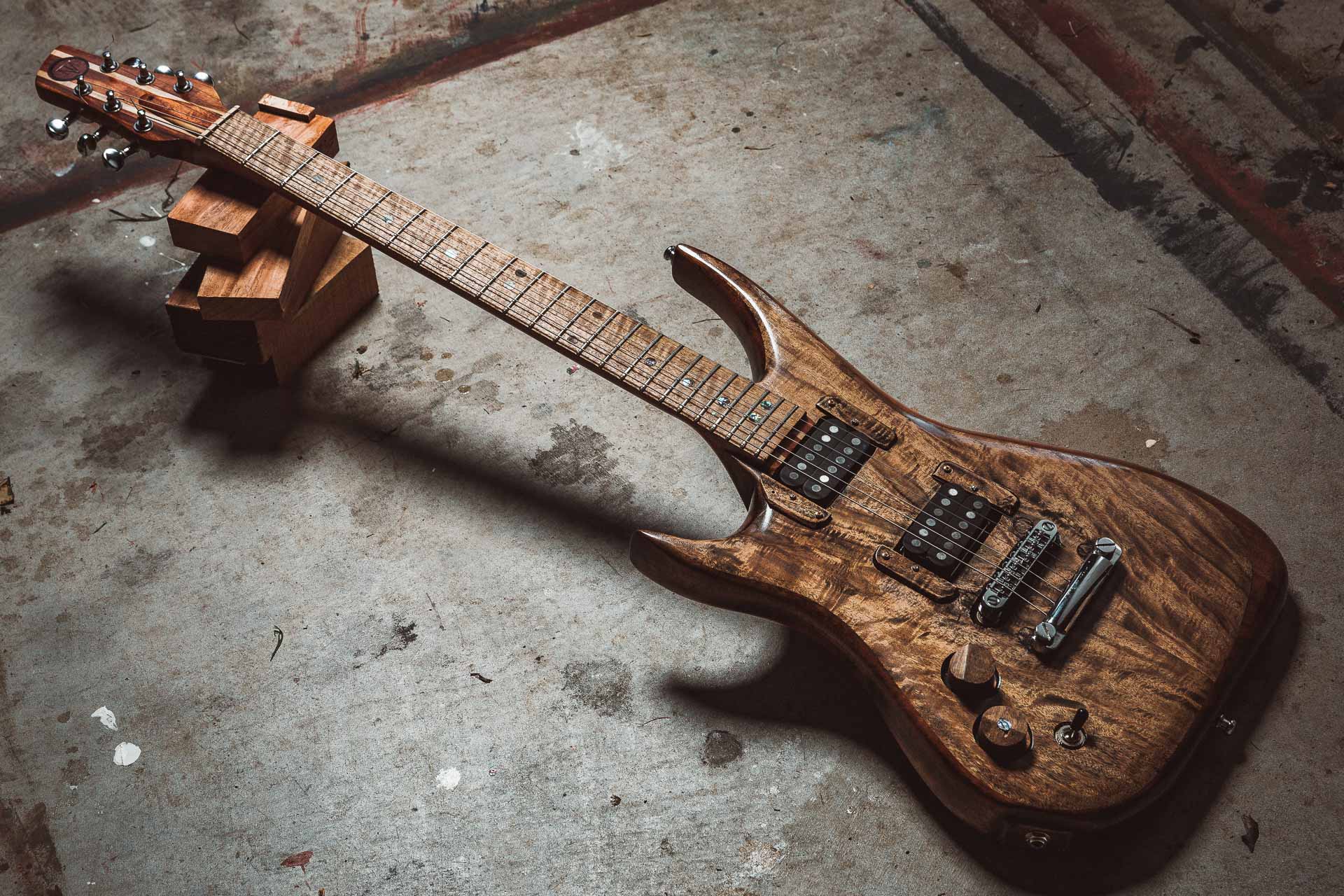 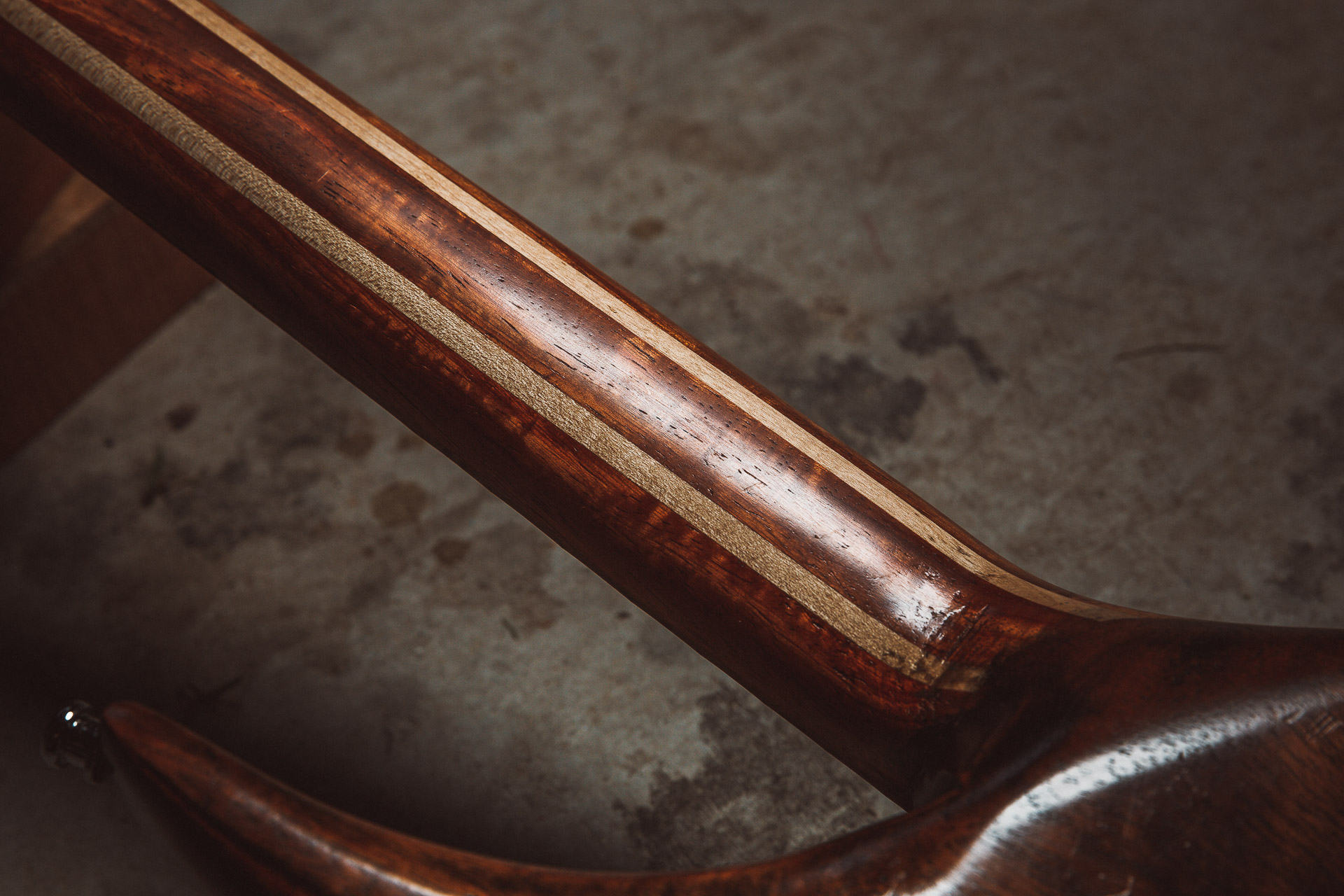 It knows it's a guitar now which is nice. New guitars need a week or so to settle down and bed in to string tension so I've dressed the frets of this one using a Stanley plane as a leveling beam (with the blade out obvs) then the crowning file then working up to 2000 grit sandpaper before a final polish.

This thing has surprised me. Its really loud and full sounding. The pickups are from Norman guitars. Remember them? They were a Canadian company who made some electrics but then went back to just building acoustics. I managed to track down a pair of their pickups mainly because I think they look cool with the big fat polepieces.

They're a5 which isn't my favourite and eventually I'll swap the neck for an a2 and maybe an a8 in the bridge but right now it's quite nice having a bit of a hot paf sound as an option.

The neck is a bit of a beast. I measured it to 21.5mm at the first and 23mm at the 12th and replicated the carve from my larrivee which is big shoulders with a flatter back. There's plenty of meat which, in my head, contributed to the big fat sound but that might be total horsepoop. I know Martin had their theory of big neck for big tone but who knows. Anyway, it's meaty.

The tone cap is a 19c thing from jaycar and it does exactly the same job as the $60 bumblebees in my 1990 Les Paul.

Oh. I finished this with leather dye sanded back and then Tru oil over it, about 6 coats or so. I put 2 coats on the neck and then beeswax over that.

REPLY
Return to “DIY BUILD YOUR OWN - Guitars”