Amp tinkerers and people who aren't afraid of 700 volts or so in here....

This is a 1989 Laney AOR 50 that my friend rebuilt from scratch as a turret board amp with some mods thrown in. I gave it back to him about 5 years ago where it languished on a shelf looking sad. Since I was looking for another amp I asked if he still had it.

Here it is. You'll notice that it's basically a JCM800 with an extra tube for some extra heat and some ridiculous switching options that don't do anything useful except pad out the spec sheet. 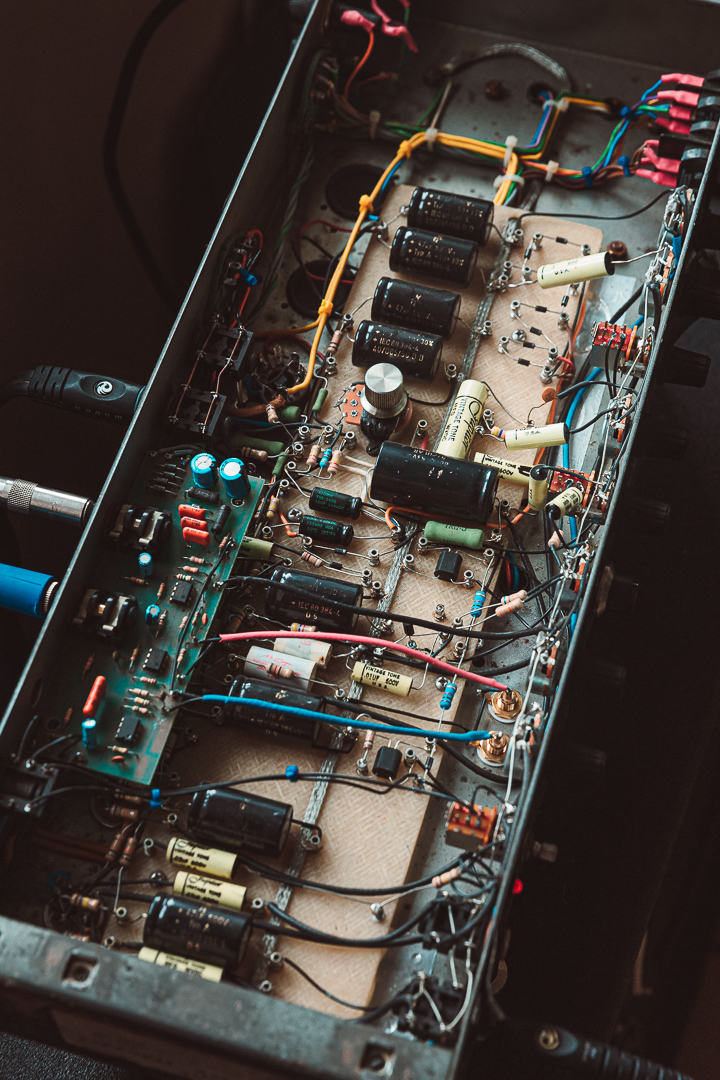 Apart from the FX loop and iron (SKOT brand, made in Worcester) it's all new primo stuff (well, new when it was built) - Sozos, Jupiters, F&T. 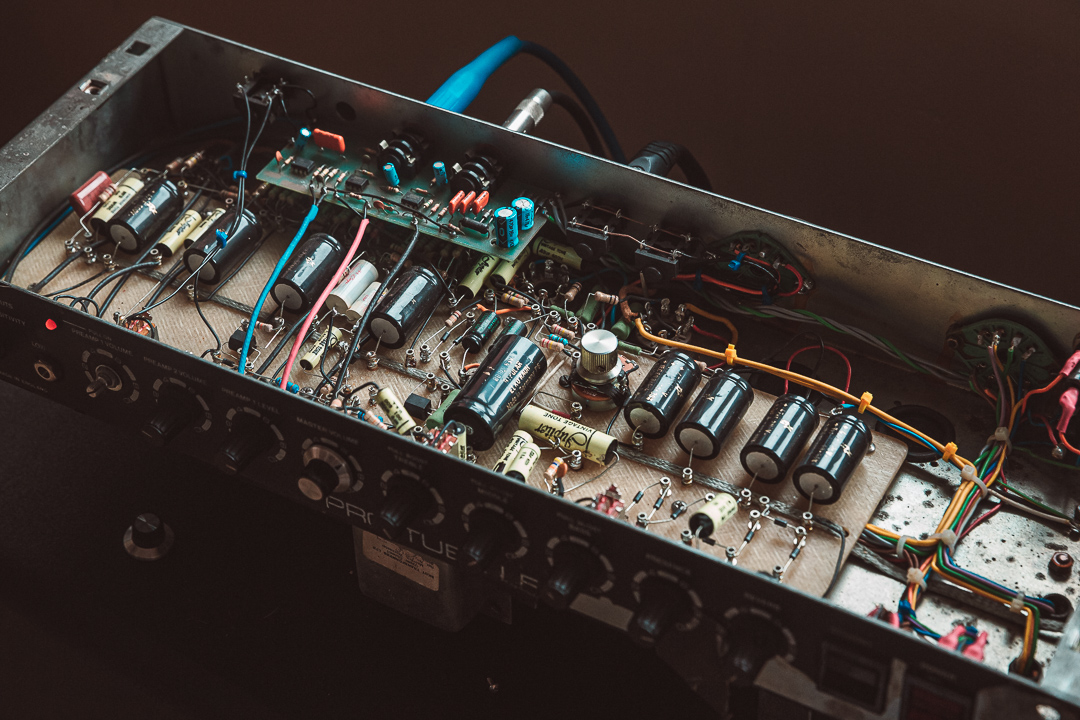 I've been going through it trying to iron out some of the bizarre design choices Laney made to this amp back in the day and to make it more usable all around and friendlier to setup to cover more ground. They addressed some of these issues with the Series II in 1993 (ish) but this series 1 has some interesting quirks.

There's a bass boost on the bass push/pull. With it not pulled the amp is very thin. With it pulled it's insane. The bass boost is tied to the master volume so its effect varies based on how loud you have the amp. If you're above 7 on the MV it doesn't have an effect, but you're also dead. At 1 on the MV it's fuckin crazy. To illustrate that point here's some plots:

Stock with boost off: 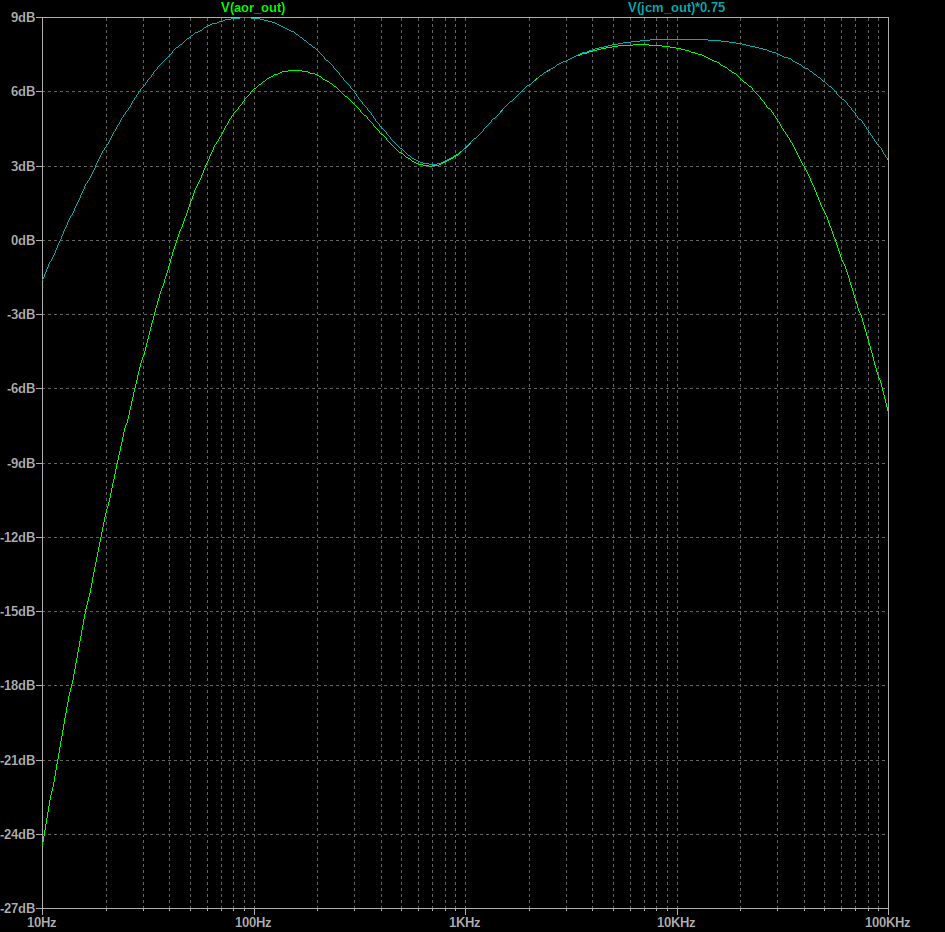 Stock with boost ON and MV at 1: 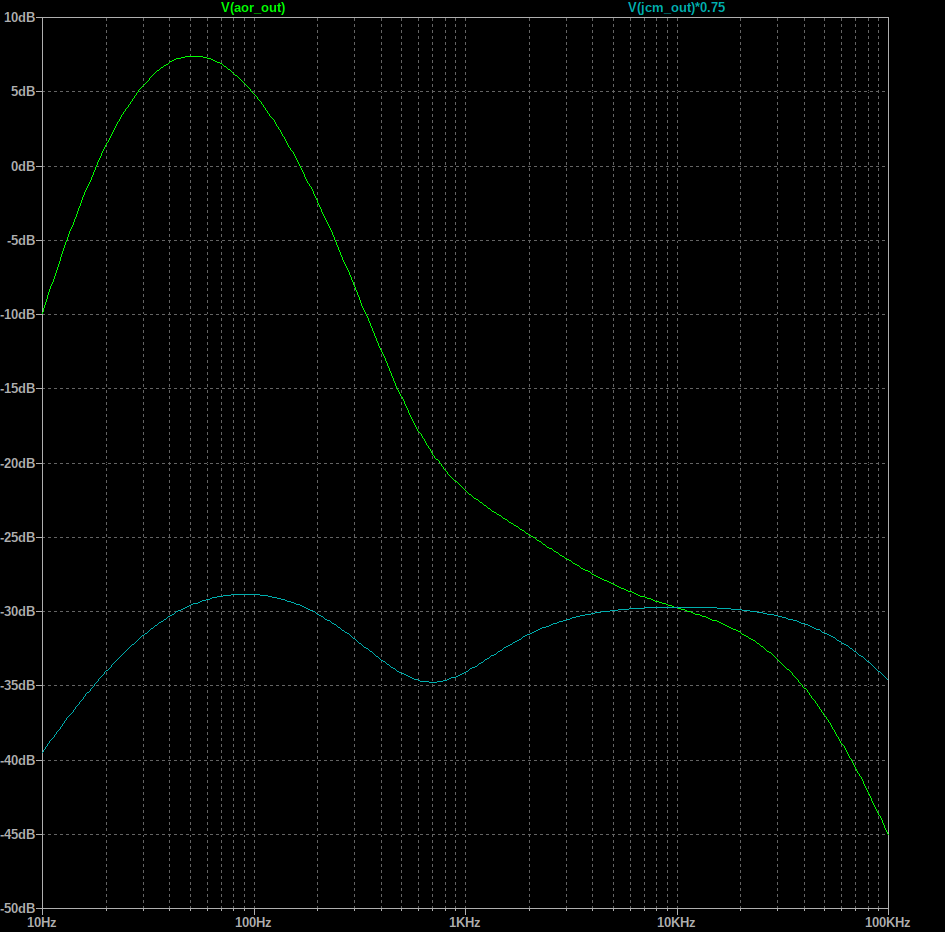 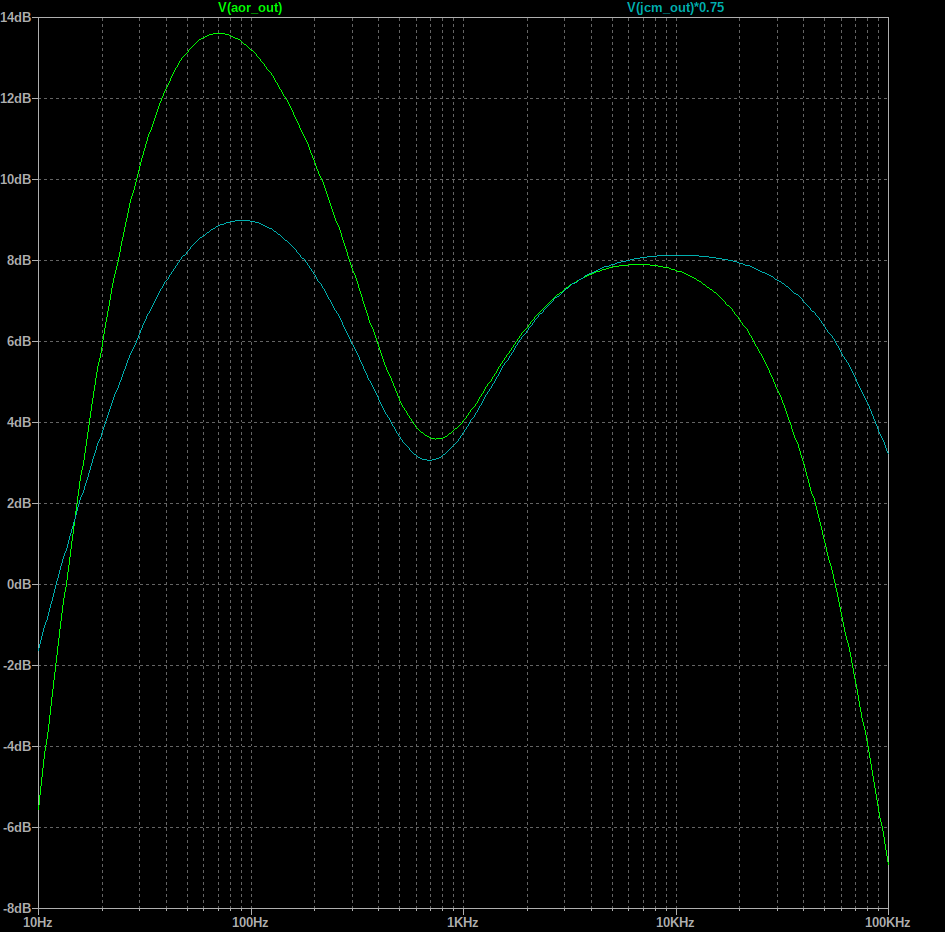 See how the bass squashes the mids and the treble entirely? I don't know who thought that was a good idea. So:

I removed TS2, R27, C16, and wired lug 1 of MV to GND so it's just a regular MV. This removed most of the crazy bass boost but still left the non-boosted stuff pretty thin. I took the 220n at C16 and replaced the 22n at C14, the coupling cap coming off tube 3. Much better. There's some healthy body in the clean tone and drive channel now, and the bass boost is not as overpowering. I'm debating changing the bass tone cap from a 22n to a 100n for more body but we'll see.

The slope resistor is now a 47k instead of 33k. Why? Because it's like that in the dual rec

R6 is now 10k. This is the fabled 'cold clipper' mod you'll see on hot rod Marshalls, Soldano, Bogner etc. In fact Marshall used to whack this on a switch for a second 'channel'. It's free gain, may as well grab it. RobRob has a 3 way switch for this for 1k/10k/47k. 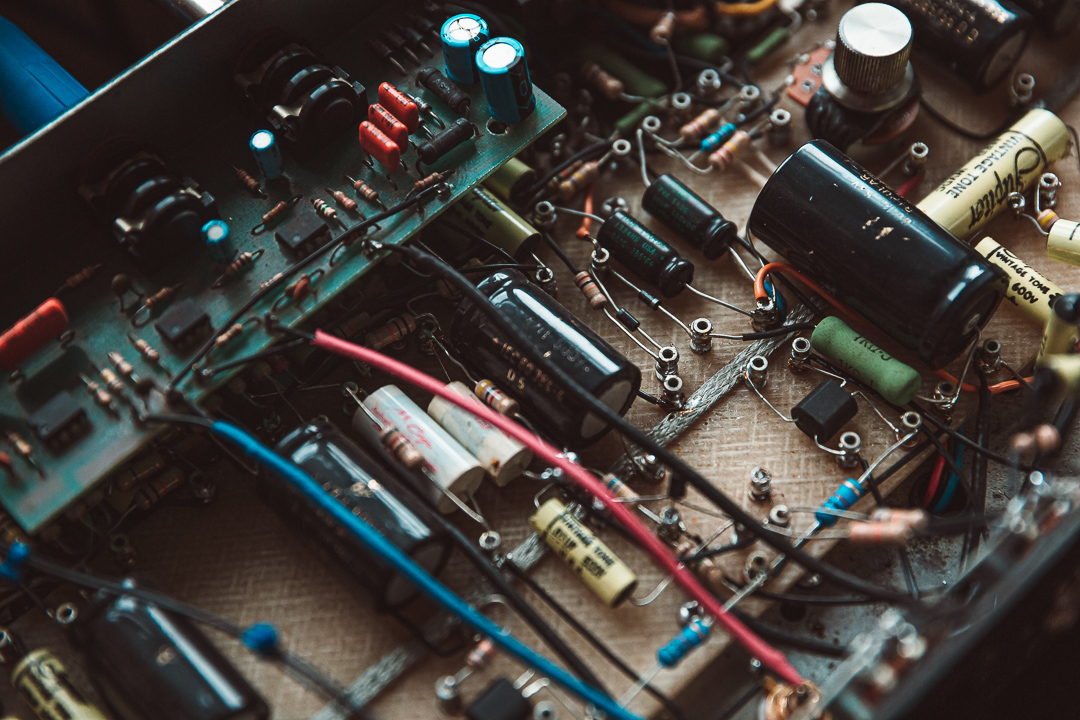 That scorch mark is my fault.

The only crazy thing left to attend to are the crusty electros in the loop PCB and change the bright cap on the treble boost to something like a 220pf. The 1n there is just insane. There's too much treble for anything useful. 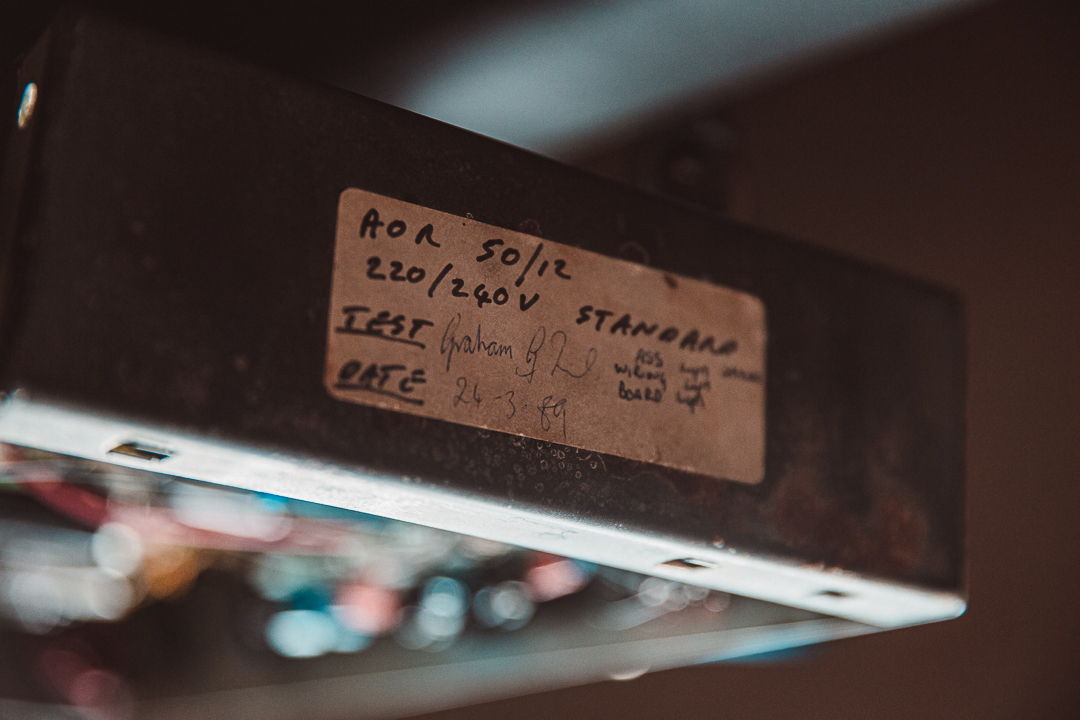 It's a cool amp, guys. My friend made this for me as a labour of love so it holds a special place in my heart. I also didn't blow myself up.

Fun bonus story: when we were talking through the rebuild we noticed that the values on the schematic didn't match the parts in the amp. I emailed Laney to ask which we should follow: the diagram or the built. They said to follow the schematic because they built them "with whatever was left on the shelf" back then. This brought a tear to my eye that fine British engineering lives on.
www.monarchpedals.com
Top

Nice! But a video demo or it didn't happen.

"There's no creativity without vulnerability."

Cool project! Dem guts look great... is that a ground bus made from desolder braid? Nice work. +1 for sounds!
Corey

Fuck that. I'm not pissing around for 30 minutes setting up a mic and camera so goobers online can give me shit. I got better things to waste my time on.

Although the guy who built the amp did do something on this about 5 years ago, but he's into that sorta thing... Well, used to be before goobers online started giving him shit.
www.monarchpedals.com
Top

No it's the sleeve from the braided cable like you find on fancy old pickups. Then again it might be the same thing as desoldering braid just marketed differently.
www.monarchpedals.com
Top

Schwwweeeeeettttt!
And how can we win,
When fools can be kings?
Top

NippleWrestler wrote: ↑Fri Nov 18, 2022 4:15 pm Fuck that. I'm not pissing around for 30 minutes setting up a mic and camera so goobers online can give me shit. I got better things to waste my time on.

Although the guy who built the amp did do something on this about 5 years ago, but he's into that sorta thing... Well, used to be before goobers online started giving him shit.

Return to “DIY - BUILD YOUR OWN Amps”