Amp tinkerers and people who aren't afraid of 700 volts or so in here.... 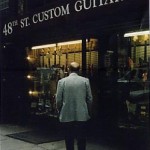 This is a recent build, but thought it might be worth sharing...

It's a clone of the "Dickinson amp" (serial number 7206), thought to have belonged to Hendrix and which Marshall used as the basis for their 100JH reissue a few years back. The circuit is basically a stock JTM 45/100 - "version 3B" according to Roe Fremstedal's excellent history of the Marshall Super Lead - with a later tonestack (33k/500pf), 10k dropping resistors and extra preamp filtering. There's some debate about when these changes occurred, as the amp didn't surface until the early 2000s.

I used Marstran/Heyboer transformers and, as you can see, quite a few NOS parts. Shipping everything over here was a quest in its own right.

After a fair bit of experimenting, I ended up with GECs for the power tubes, Mullards in V1+2 and a Valvo in V3.

The stock HT for these amps is very high (~560V). The reproduction PT had a lower voltage tap (490V), but curiosity got the better of me and I discovered I preferred the original voltage (so much punch!) After blowing a JJ - supposedly the most rugged current production KT66s - I realized I'd have to fork out for the original GECs....

Most importantly, the amp is a powerhouse. Incredible rock tone. It's obviously loud as anything, but in practice, I run it into a Boss Tube Amp Expander, which then feeds a 2x12 cab with Pulsonic T1281s.

I have a headbox - built by Sourmash in the US - but still need to cut the holes to install the correct Vox vents. As it is, running the amp outside a cabinet keeps it cool, and lets me keep an eye on the tubes!

I've laid the vents themselves on top here so you can get an idea.

Nice work. Would love to hear it.
"There's no creativity without vulnerability."

Wow, there's some talented folks on this forum.
Top

That looks seriously great but I'd be inclined to overlook the authenticity factor and use a standard 100 watter top vent for the box. Big bottle 66's chuck out a fair amount of heat and obviously far more is generated than in an AC30 ( and they get hot enough )..
Top

Dharmajester wrote: ↑Mon Aug 01, 2022 3:41 pm That looks seriously great but I'd be inclined to overlook the authenticity factor and use a standard 100 watter top vent for the box. Big bottle 66's chuck out a fair amount of heat and obviously far more is generated than in an AC30 ( and they get hot enough )..

Fair point. I might be more inclined to put a small fan inside and preserve the look though (superficial I know).

I've also made a slight concession to longevity by running it with a variac at 230V, which keeps the B+ at 560V (and the variac is plugged into an online UPS, so this is stable +/- 1V or so). I have the tubes biased rather conservatively at about 55% of max plate dissipation, but this keeps the B+ up around 580V at full mains - it's a balancing act!
Top

Nice build bro, and cool circuit! Good luck with those teething issues, I hope those new tubes last as good as they sound. There are a bunch of other techs and builders on the forum who are generous with their expertise, its great to see your build. That cab is hot too, congrats.
Corey

Got the cabinet sorted just in time for Akl gearfest! Here's the final product:

Next time I want to hear it

So, is that low alcohol or no alcohol at all? mmmm, no alcohol, do you want to try it? Noooooooooo.
Top
Post Reply
9 posts • Page 1 of 1

Return to “DIY - BUILD YOUR OWN Amps”