I've just received the prototype PCB for my version of the classic Uni-Vibe that I'm calling the Pадио Москва (Or in English, Radio Moscow. Despite my inability to spell it correctly in Russian on the PCB itself. That's why we do prototypes I guess.) Atmospheric Modulator. Here's a couple of images of the PCB. 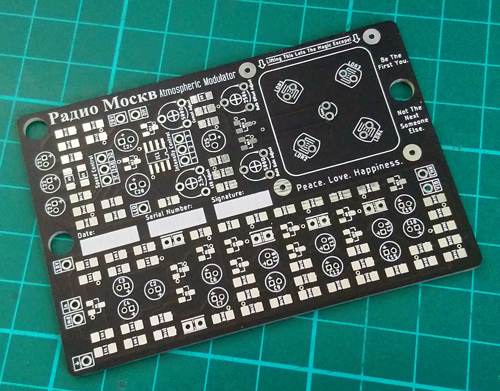 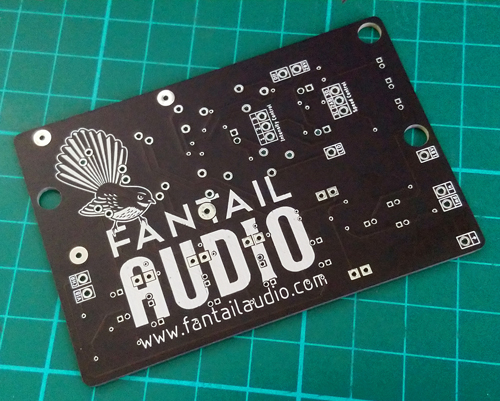 It is named after the Soviet radio station that Fumio Mieda, the inventor of the Uni-Vibe, used to listen to as a young man and provided the true inspiration behind the effect. Due to the long distances that the radio waves had to travel, the atmospheric conditions created a unique modulation effect that Mister Mieda thought could be utilised in music somehow and set to work creating what would eventually become the Uni-Vibe as we know it.

I'll be posting updates as things progress with the build so stay tuned. In the meantime, enjoy these couple of very informative videos from Digimart's Deeper's View series featuring an interview with Fumio Mieda himself and the playthrough of a couple of vintage Univibe units.

Ooooh excited to hear this!!

Polar Bear wrote: It will continue to be a mystery as to why this is such a sausage fest.

Looks like lots of surface-mount parts? Will you be selling these as PCBs, or as a finished pedal?
Nothing to see here.
Top

awesome. I love UniVibe, reminds me of Hendrix.

Those videos look interesting as well, will watch them when I've got a little more time (currently working, and watching my kids end of years award ceremonies live streaming on Facebook)
Top

Thank you Jeremy. I know that I am excited by it.

Looks like lots of surface-mount parts? Will you be selling these as PCBs, or as a finished pedal?

Thanks. I think so too.

There are indeed a few SMD components. Mostly the resistors; in a 1206 package (3.2mm (L) x 1.6mm (W)) and the transistors (in SOT-23 package). All of the capacitors are through-hole and I am using WIMA film caps for the phase caps i.e. the traditional 15nf, 220nf, 470pf, and 4.7nf arrangement. And there are a few other through-hole components are well such as the LDRs (or light dependant resistors), the blub, and the trim pots. As I've found the inclusion of a few thought-hole parts makes laying out the PCB just that little bit easier. Also, I wanted to keep the footprint of the PCB as small as possible; the PCB itself is 85mm (L) x 57mm (W) so I could fit it inside a 1590BB-sized enclosure.

The plan at this stage is to sell it as a finished pedal. I hadn't given the idea of potentially selling a PCB separately much thought. I guess because the idea of soldering that many SMD components wouldn't really appeal to many DIY pedal builders.

~ Blake.
"There's no creativity without vulnerability."

I love the univibe. Let me know if you need a test pilot

Those videos look interesting as well, will watch them when I've got a little more time (currently working, and watching my kids end of years award ceremonies live streaming on Facebook)

They are very informative. I'm guessing that trying to sell something in the late 1960s in the US that had anything to do with the Soviet Union at that time was probably going to be a bit of a hard sell, hence "This emulates the Doppler sound of a Leslie speaker."

Thanks. I'll keep that in mind when the time comes.
"There's no creativity without vulnerability."

I’ve been interested in a vibe so I’m looking forward to this!
Top

Can I point out how lucky you were this thread wasn't deleted at first sight.
So, is that low alcohol or no alcohol at all? mmmm, no alcohol, do you want to try it? Noooooooooo.
Top

I assume due to the use of the Russian language in the title and the association with less than ethical Internet practices?
"There's no creativity without vulnerability."

Super interested in a pedal when they come out.

Founder of The Mysterons. "They promised they'd never play again... They lied"
Producer. "Looking for the sound of a sow's ear made from a silk purse with a side of whiskey and hot bitches? Call me."
Manager. "I'm not looking for perfection, I'm looking for awesome!"
Top

I'm planning on posting progress reports here on a regular basis as I iron out any potential wrinkles so stay tuned.
"There's no creativity without vulnerability."

So, is that low alcohol or no alcohol at all? mmmm, no alcohol, do you want to try it? Noooooooooo.
Top

Good to know for next time. Sorry about that and thank you for not being so quick on the trigger.

"There's no creativity without vulnerability."

Return to “DIY BUILD YOUR OWN - Pedals”