NGD: Epiphone LPS-95L, Made in Japan.

NGD: Epiphone LPS-95L, Made in Japan.

After longer in the Auckland depot than it took to ship from Japan, this arrived today. 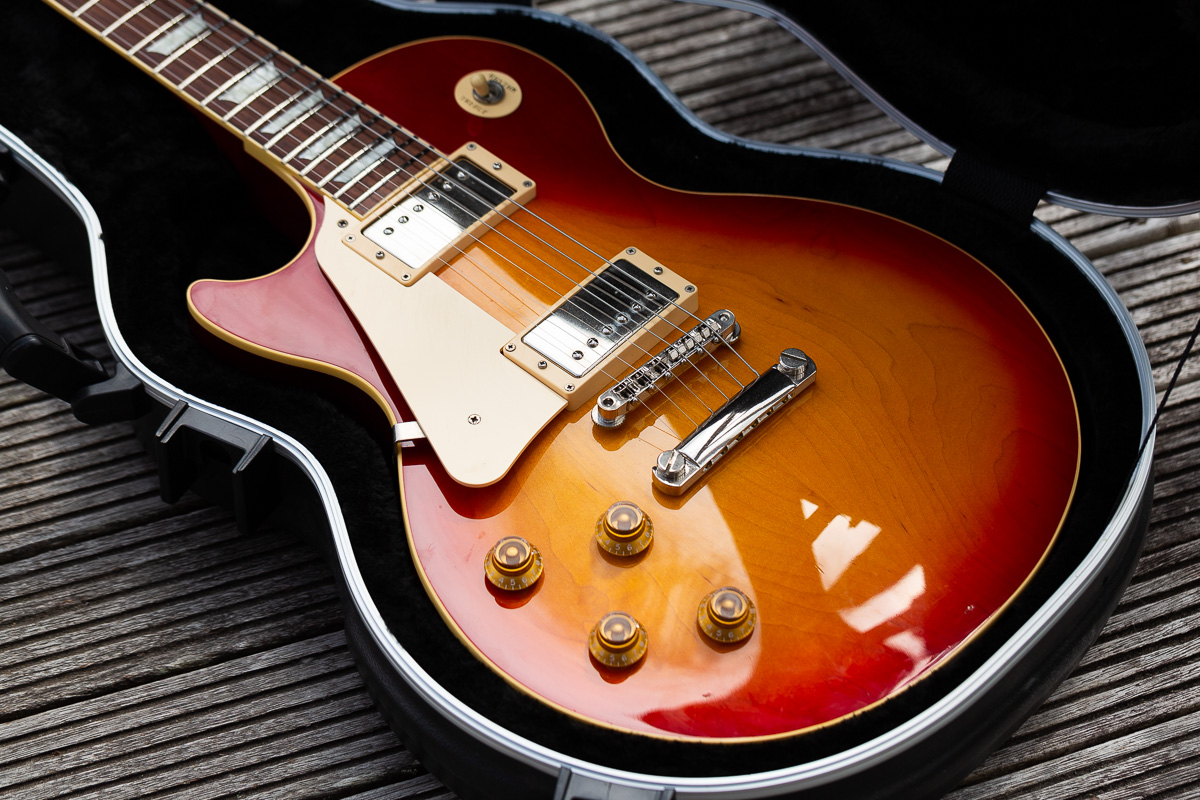 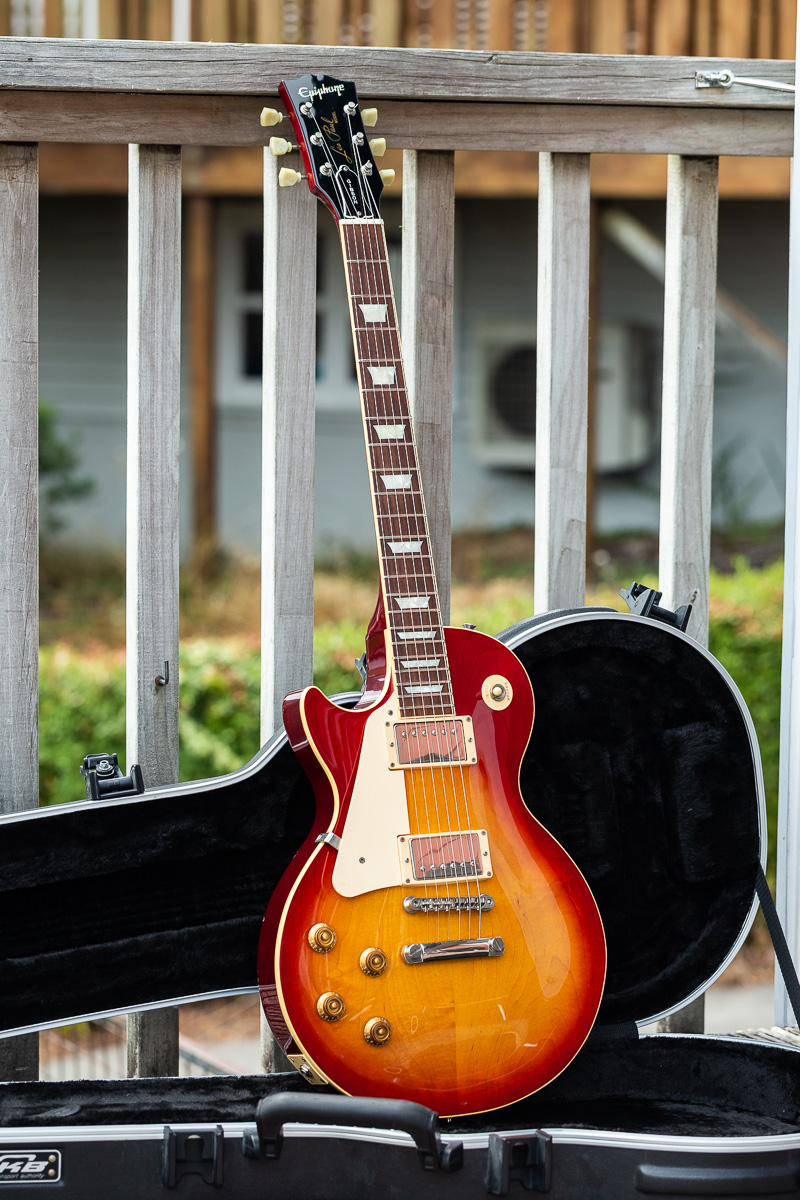 Nice and logical. I really like how some Japanese brands typically incorporate the price in the model number (same for Edwards if you're wondering) as that makes it much easier to navigate your way around the totem pole. 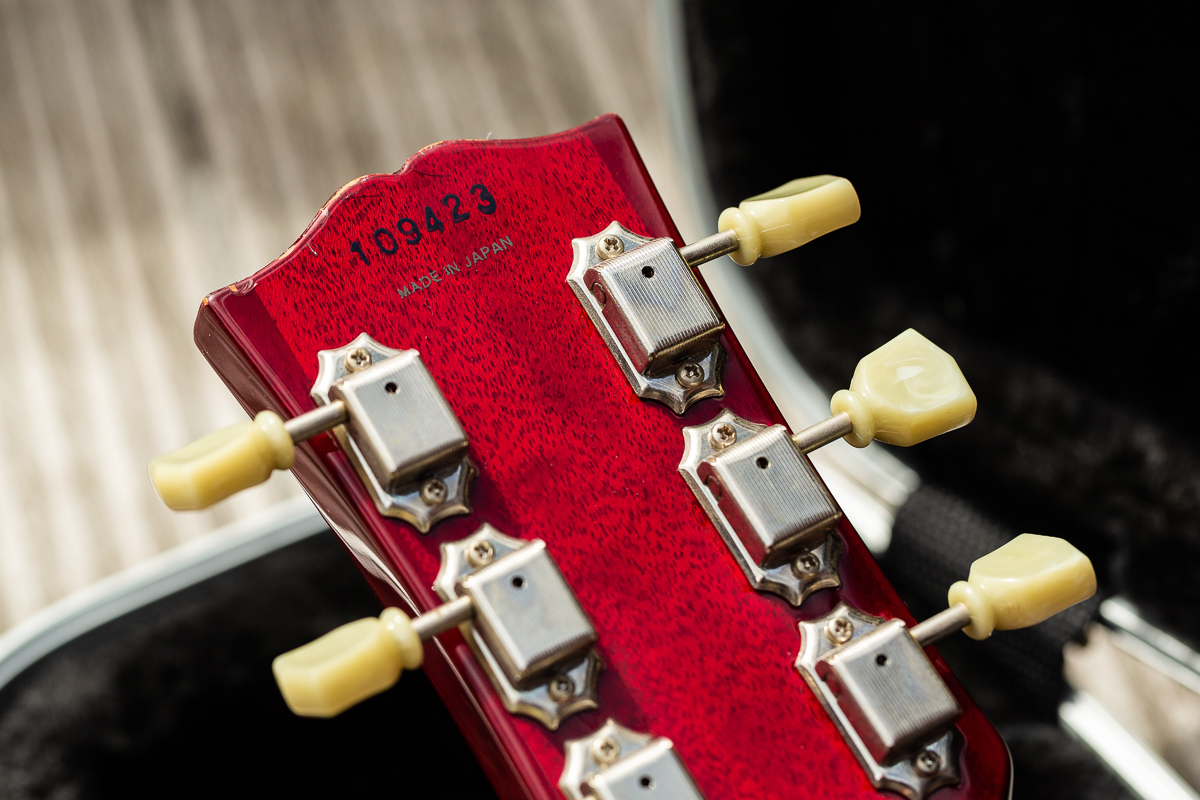 2 piece centre joined back, nice even grained piece of mahogany, 1 piece neck (apart from the wings but not sure that counts), has the Gibson headstock which only appears on models for the Japanese domestic market. It's got a very solid feel to it and is exceptionally well put together like all things Fujigen. 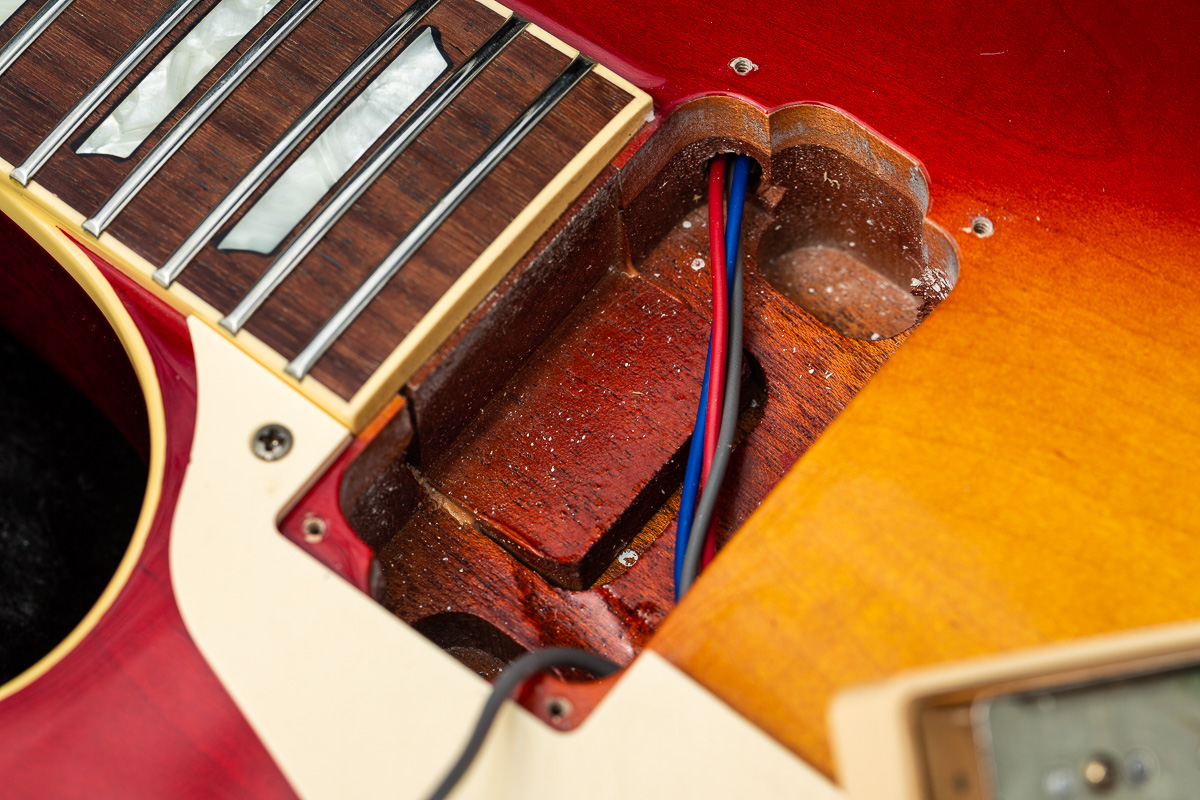 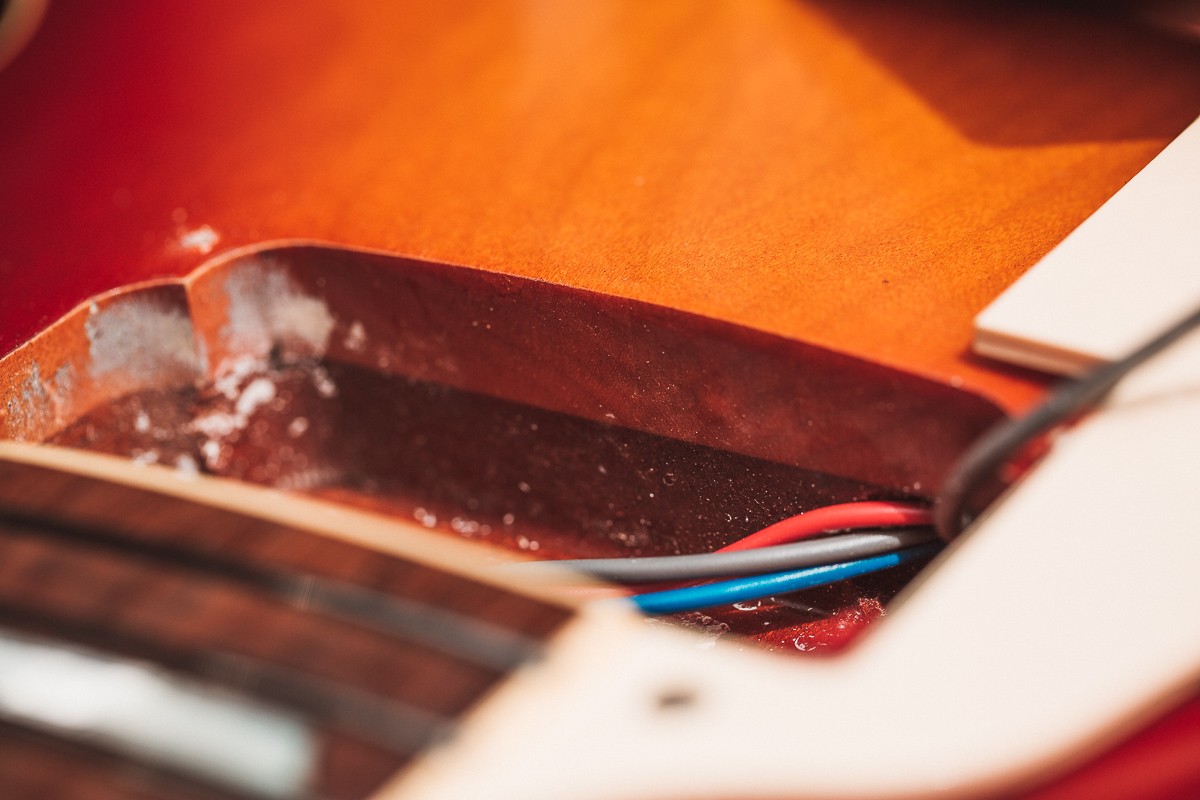 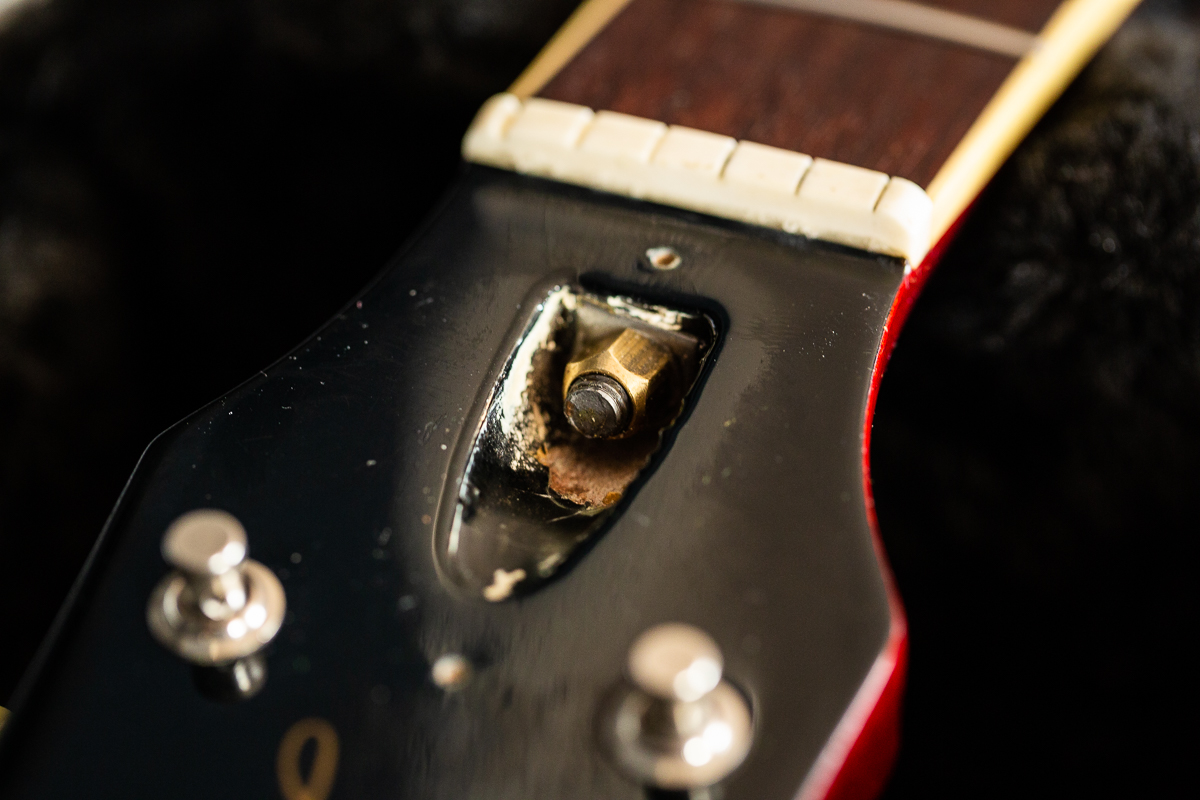 All the hardware and electronics are Gotoh. The pickups are Gotoh PAF style and tbh they're decent enough with typical PAF specs with your ~8.5k and A5 magnets. It's a hard recipe to get wrong tbf. The pots etc are mini but Gotoh so they're actually decent quality and feel reassuring enough but should I feel the need I have a CTS/Switchcraft/Sprague setup looking for a home but for now they're perfectly adequate with a nice feel and predictable travel. 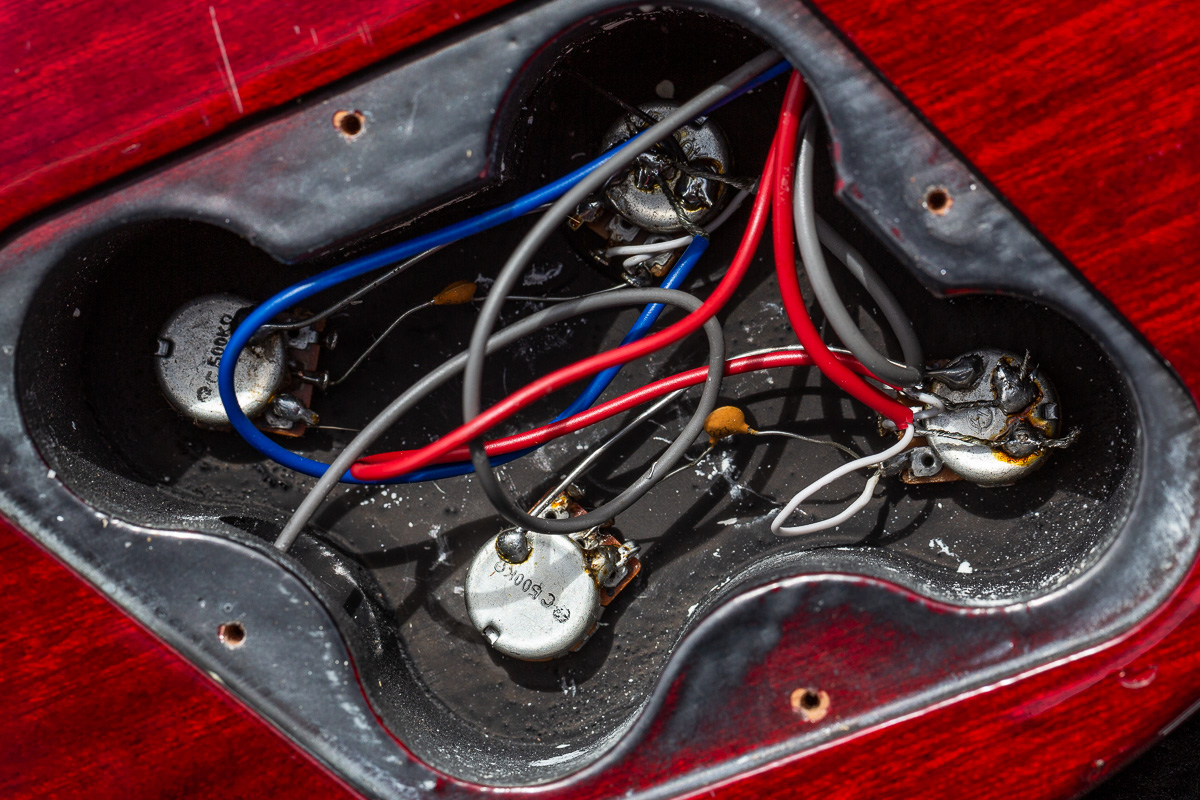 Bridge pup. Nothing tremendously exciting but a fine performer nonetheless: 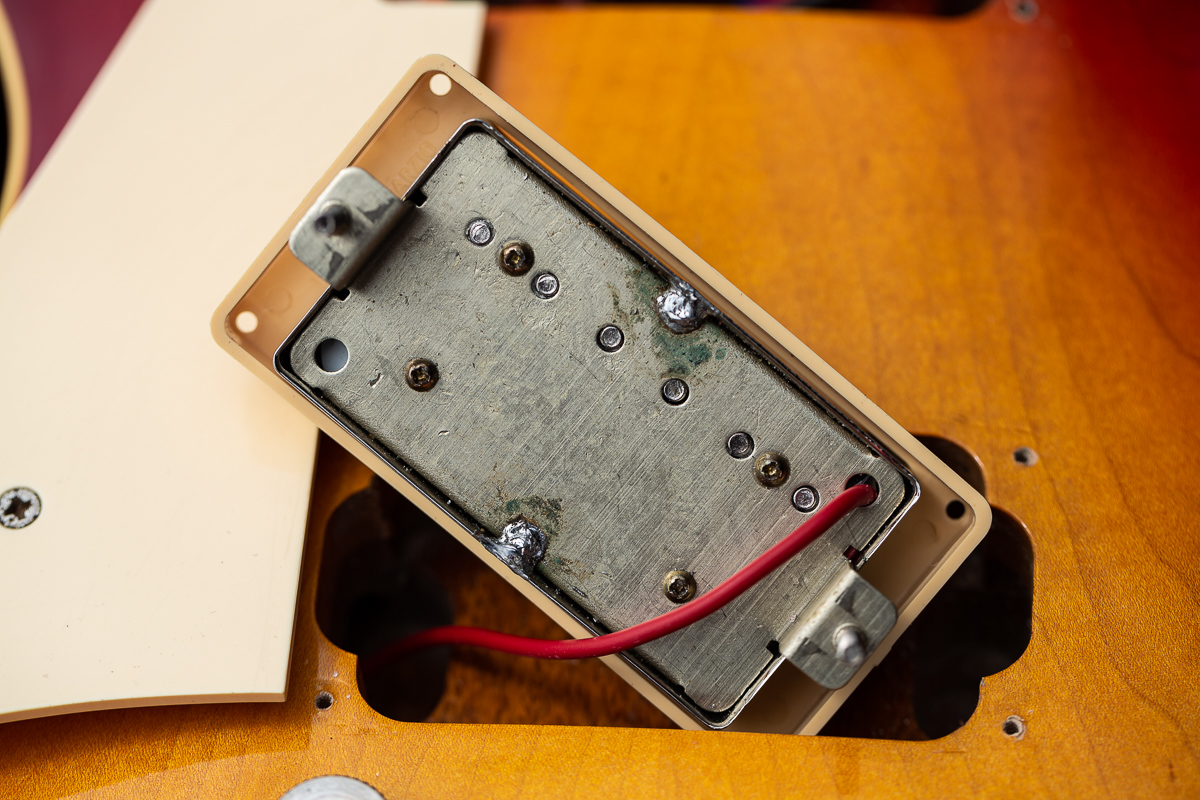 Got the ABR1 style bridge with the wire on there. G for Gotoh: 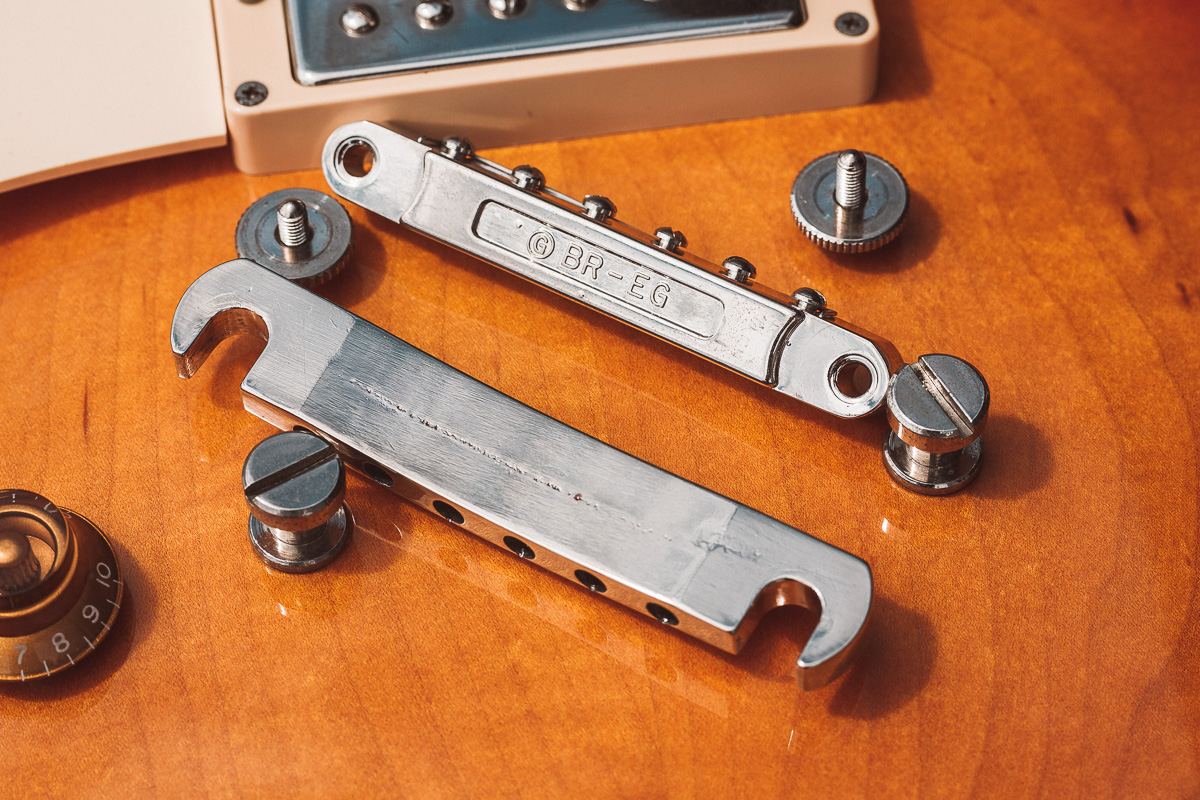 And here's how it is now sans pickguard, new nut since I play flipped, new pickups: 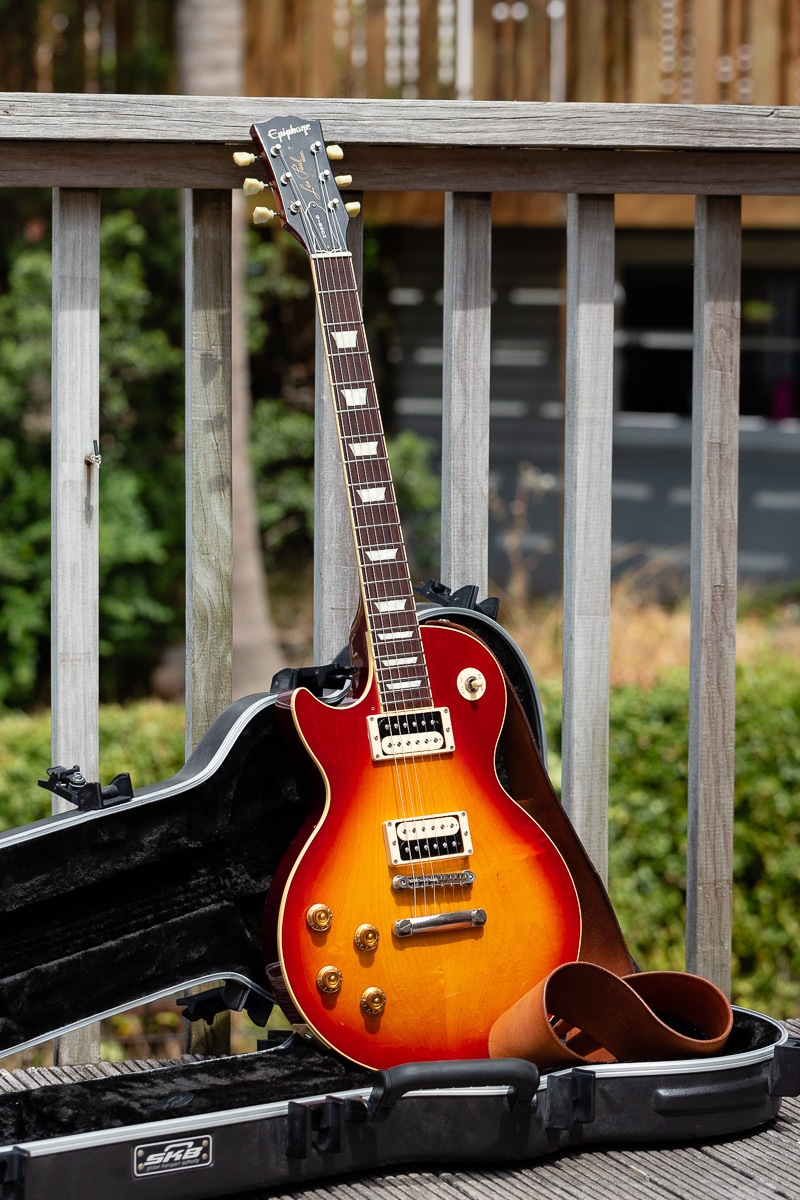 Overall guys I'm very impressed. I knew these guitars had a stellar reputation given their maker and pedigree and they've met those expectations. The woods, tightness, construction are right up there. The neck is slightly fatter than a 60s profile and there's definitely a good amount of meat on there to dig in and the exemplary fretwork certainly doesn't hurt on that front.

The finish is beautifully done. It's poly but it's thinner than most and luckily the colours are darker than the images posted on Ishibashi's site (where this came from), I didn't want a clownburst messing up the feng shui. Plus, plain tops are the best tops.

The inevitable This vs Gibson question.

I've had 3 Gibsons in my life and sold them all. The only Les Paul I kept is my 1990 Orville by Gibson LP Custom, which is also MIJ and also made at Fujigen. That thing's an absolute monster. I'd put this Epiphone right up against Gibson standards any day of the week tbh. It's easily on a par save for the electronics, the finish (which isn't nitro), and the polarising nibs but that feel in the hands and under the fingers is there. Electronics I can change, the finish is what it is, and nibs are bullshit anyway, but in terms of an instrument that just makes you want to actually play this thing hits the spot and all for about 1/3rd the price of anything from Gibson, but with QC and construction of a guitar worth much more and probably better than Gibson's efforts in that department.

I find myself sneaking looks when I go past the guitar room and even now it's pulling my eyeballs towards it like a magnet. I didn't mention the sound. It's very good. Big growly LP-ness.

They only made these from around 1998-2004 after which the Epiphone Elite line came into being (same guitars otherwise), but they have a dodgy looking headstock which I can't jive with, same reason I didn't buy a Heritage. It's not the label, it's the shape.

Big props to Ishibashi who packed it like it was the Mona Lisa and who got it out the door the same day. They also did a fret job and setup before it left the Tokyo store (in a SKB-56 case too). There's no dings or cracks and the headstock is still attached which is always nice.
www.monarchpedals.com
Top

Agree - nibs schnibs.
"Man is the most insane species. He worships an invisible god and destroys a visible nature. Unaware that this nature he's destroying is this god he's worshipping." - Hubert Reeves
Top

Slowy wrote: To Danny, everyone is either a supplier, customer or a courier.

This post has made me think about importing a guitar from Ishibashi.

Are they legit i.e. stake their reputation on not selling fakes?
Top

They've been around since the 1930s and areworkd renowned as being one of the best in the business. They know what they're doing and I'd trust them to get it right.

But as always, caveat emptor. Responsibility lies with the buyer if there is doubt. Ask questions, do the research. I wouldn't presume Ishibashi would willingly sell something as something else though, not in a thousand years.
www.monarchpedals.com
Top

Are they legit i.e. stake their reputation on not selling fakes?

Yes, 100% safe but like NW said, ask questions. There are a few more shops in Japan with a similarly good reputation so you are not limited to Ishibashi only.
"I felt as if I'd been had. I'd read to the end what I wished I hadn't begun."
Top

Nice looking guitar. Interesting that the Les Paul signature on the headstock is upside down from a left-handed perspective. They must have just used a neck from a right-handed guitar flipped the nut and been done with it maybe???
www.fantailaudio.com
Top

FuzzMonkey wrote: ↑Sun Jan 09, 2022 9:58 am Nice looking guitar. Interesting that the Les Paul signature on the headstock is upside down from a left-handed perspective. They must have just used a neck from a right-handed guitar flipped the nut and been done with it maybe???

There's a guitar teacher in ChCh who has a Gibson LP like that too. Except he had the nut from a right handed guitar and play the strings upside down.
Top

FuzzMonkey wrote: ↑Sun Jan 09, 2022 9:58 am Nice looking guitar. Interesting that the Les Paul signature on the headstock is upside down from a left-handed perspective. They must have just used a neck from a right-handed guitar flipped the nut and been done with it maybe???

It's the same way on the Gibson Historics for whatever reason.
www.monarchpedals.com
Top

I'm jealous is all I'll say. Being left-handed myself, I know the pain of finding something you want/like and this one a real beaut.
www.fantailaudio.com
Top
Post Reply
12 posts • Page 1 of 1